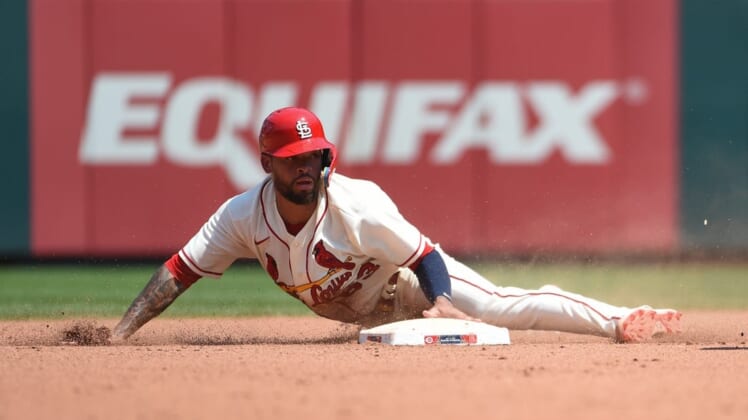 Goldschmidt became the 10th active player in the majors to reach that plateau.

Lars Nootbaar hit a three-run homer for the Cardinals and Edmundo Sosa drove in two runs before departing in the eighth inning after crashing into the side wall while chasing a pop-up and injuring his lower leg.

Albert Pujols scored twice and moved him past Lou Gehrig for 12th place on the all-time list with 1,889 career runs

Jonathan India put the Reds up 1-0 by leading off the game with a homer. It was his fourth of the season.

In the bottom of the inning, Tommy Edman hit a single and Pujols, Tyler O’Neill and Brendan Donovan drew walks to force in a run. Lodolo hit Sosa to force in another run.

The Cardinals increased their lead to 5-1 in the second inning. Goldschmidt hit a two-run homer, his 20th of the season, and then Pujols hit a single and Lodolo hit O’Neill and Donovan with pitches before Sosa hit an RBI infield single.

The Cardinals pushed their lead to 7-1 in the third inning on Edman’s walk, Dylan Carlson’s triple and Goldschmidt’s RBI single.

The Reds cut the lead to 8-3 off relievers in the eighth inning. Nick Senzel walked, Stuart Fairchild reached on an error, India walked, Brandon Drury hit a RBI single, and Fairchild scored on a wild pitch.

The Cardinals got those runs back with Nootbaar’s three-homer in the bottom of the inning. The blast was the fourth of the season for Nootbaar.