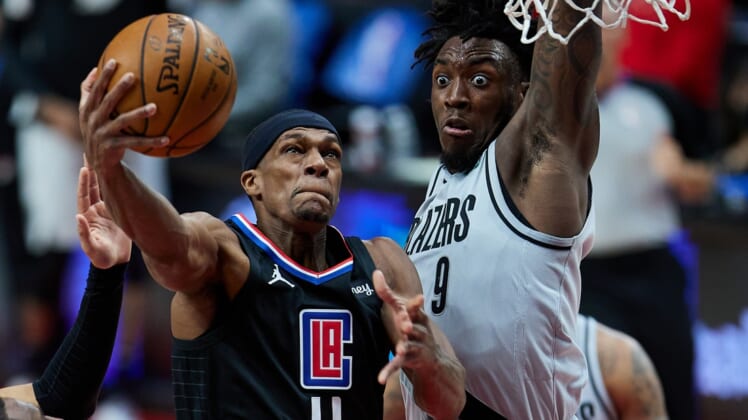 Paul George made two free throws with 4.8 seconds left to cap a 33-point effort and propel the Los Angeles Clippers to a 113-112 victory over the host Portland Trail Blazers on Tuesday night.

George scored the final six points of the game as the Clippers (41-19) won for the 15th time in the past 18 games. Marcus Morris Sr. added 16 points as Los Angeles defeated the Trail Blazers for the sixth consecutive time.

CJ McCollum scored 28 points for Portland (32-25) but missed a jumper just before time expired. The loss was the seventh in 10 games for the Trail Blazers.

Los Angeles played without Kawhi Leonard (foot) for the fifth time in six games. Leonard will miss at least three more games before being re-evaluated on April 27.

Nicolas Batum and DeMarcus Cousins tallied 11 points apiece and Ivica Zubac added 10 points for the Clippers, who shot 50 percent from the field and were 11 of 38 (28.9 percent) from 3-point range.

George, who collected 11 rebounds, has topped 30 points in six of his past seven performances.

Norman Powell scored 23 points, Carmelo Anthony added 18 points and Anfernee Simons had 13 points for the Trail Blazers, who shot 44.7 percent from the field and made 14 of 44 (31.8 percent) from long distance.

Los Angeles moved within 109-107 on Zubac’s layup with 1:18 remaining, but McCollum answered with a 3-pointer 15 seconds later for Portland’s final points.

George scored the next four points to move the Clippers within 112-111 with 33.6 seconds left. Powell missed a 3-point attempt, leading to George’s decisive free throws.

Powell scored 17 first-half points to help the Trail Blazers possess a 60-56 lead at the break.

Portland scored the final seven points of the first quarter to hold a 31-30 advantage. The Trail Blazers later used a 12-2 burst to open up a 58-48 lead on Powell’s 3-pointer with 2:01 remaining before Los Angeles answered with the next eight points.

Portland led 71-66 after McCollum’s 3-pointer with 5:43 left in the third quarter. However, Los Angeles controlled the remainder of the stanza, and George’s 3-pointer with 9.7 seconds left gave the visitors an 86-82 edge entering the fourth quarter.