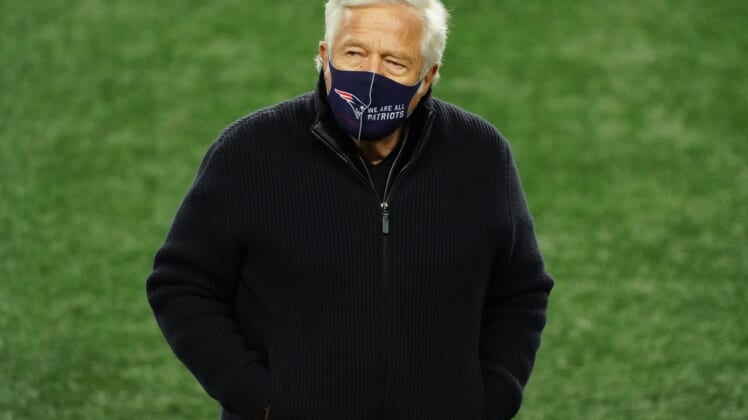 Dec 28, 2020; Foxborough, Massachusetts, USA; New England Patriots owner Robert Kraft on the field as his team warms up before the start of the game against the Buffalo Bills at Gillette Stadium. Mandatory Credit: David Butler II-USA TODAY Sports

The New England Patriots were quite active during the NFL’s free agency period, spending a league-record $165 million in guaranteed money.

While the Patriots added tight ends Hunter Henry and Jonnu Smith and wideouts Nelson Agholor and Kendrick Bourne, among others, Patriots owner Robert Kraft acknowledged Wednesday that being active in free agency isn’t the desired path toward long-term success.

“In the end, if you want to have a good, consistent, winning football team, you can’t do it in free agency,” Kraft said. “You have to do it through the draft because that’s when you’re able to get people of great talent, whether it’s Willie McGinest or Tom Brady. You get them at a price where you can build the team and be competitive. Once they get to their (second) contract, if they’re superstars, you can only balance so many of them.

“… Really, the teams who draft well are the ones who will be consistently good. I don’t feel like we’ve done the greatest job the last few years and I really hope and believe I’ve seen a different approach this year.”

The Patriots look to rebound after a 7-9 record last season resulted in the first time they missed the playoffs since 2008. They have 10 picks in the 2021 NFL Draft, which kicks off on April 29. Barring a trade, their first pick will be No. 15.

As for New England’s recent top draft picks, well, judge for yourself.

In 2017, the Patriots selected defensive end Derek Rivers and offensive lineman Antonio Garcia in the third round. Both players are no longer with the team.

The following year’s first-round picks, offensive tackle Isaiah Wynn and running back Sony Michel, have produced inconsistent results. Wynn has started 18 games over the past two seasons while Michel rushed for 1,843 yards and 13 touchdowns in his first two campaigns before being limited to 449 yards and one score in 2020.