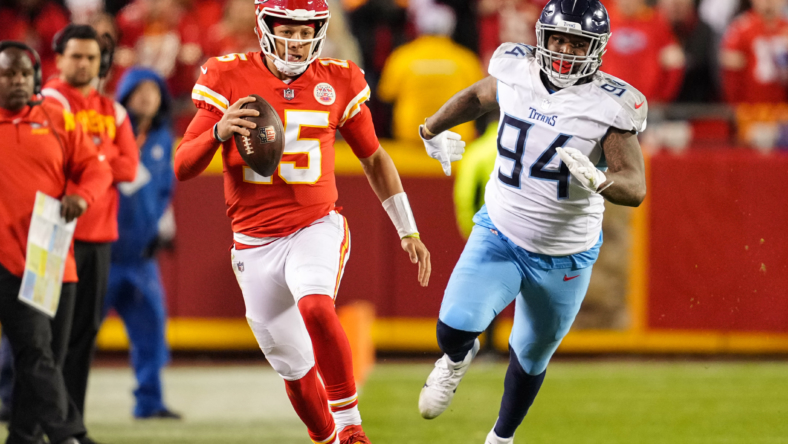 Patrick Mahomes and the Kansas City Chiefs couldn’t get anything going after scoring nine early points Sunday night against the Tennessee Titans.

In fact, Tennessee’s defense held the Chiefs without a point for seven consecutive possessions. The Chiefs were frustrated. Their fans were booing. It wasn’t a great look for a team that was two-touchdown home favorites.

Down 17-9 in the fourth quarter, Kansas City was facing a third-and-17. That’s when Mahomes did his thing on the ground with an absurd 20-yard scramble for a first down. When we say absurd, we mean it.

That’s just brutal for the Titans. They had the coverage down the field, but couldn’t account for Mahomes on the ground.

Within six plays, Kansas City found itself in the end zone via a 14-yard touchdown run from Mahomes himself.

Come on. That’s just ridiculous stuff from Mahomes right there.

Down 17-15, the Chiefs then attempted for two points and a tie game. After multiple penalty calls on the Titans’ defense, Patrick Mahomes took it upon himself to score from one yard out to tie the game.

A quarterback that is known primarily for his ability to throw the ball, Mahomes finished that drive having completed 34-of-51 passes for 339 yards. He also added 63 yards and that one score on the ground.