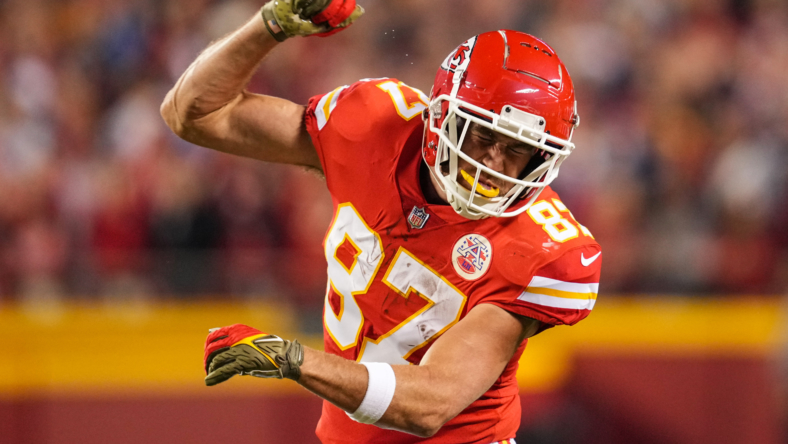 All-Pro tight end Travis Kelce and the Kansas City Chiefs found themselves as overwhelming favorites at home against the Tennessee Titans Sunday night.

Despite the fact that Tennessee had won five consecutive games heading in, it didn’t seem to have too much of a chance with rookie Malik Willis getting the start against Patrick Mahomes and Co.

This looked to be the case with the Chiefs taking a 9-0 early lead.

Then, something crazy happened. The Titans’ defense stepped up big time against Kelce and Co. Meanwhile, Tennessee’s offense scored 17 consecutive points while relying on stud running back Derrick Henry.

With Tennessee up 14-9 in the third quarter, Kelce dropped a short pass from Mahomes. It landed right into the hands of Roger McCreary for an interception.

One of the best tight ends in modern NFL history, it’s rare to see Travis Kelce drop a pass like this. In fact, he entered Sunday’s outing having dropped just two passes on 60 targets through seven games this season.

Kelce was not a happy camper after this dropped pass led directly to a Titans field goal and an eight-point Chiefs deficit.

In reality, this should have been a 15-yard penalty on Kelce. While it went uncalled, this is just an example of the frustration we’re seeing from the Chiefs Sunday night.

The backdrop here was Chiefs fans sending boo birds in the direction of their team heading into halftime and in the third quarter.

It’s an odd scene for a team that many believe is one of the top Super Bowl contenders through the midway point of the season.

As for Kelce, he had been dominant leading up to Week 9. That included the three-time All-Pro catching 46 passes for 553 yards and a league-high seven touchdowns in as many games.