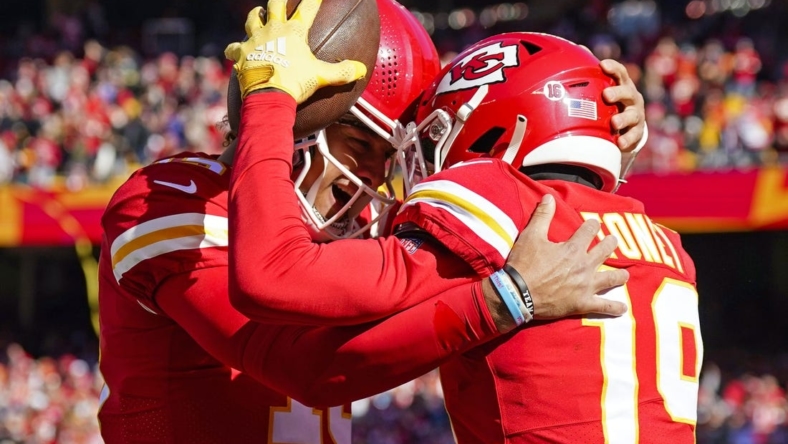 Kelce had six receptions for 81 yards, and Isiah Pacheco rushed for 82 yards on 16 carries.

Trevor Lawrence threw for 259 yards and a pair of touchdowns to Christian Kirk on 29-for-40 passing for the Jaguars (3-7), who have lost six of their past seven.

Travis Etienne was held to 45 yards on 11 carries, and Kirk nabbed nine catches for 105 yards.

Lawrence threw a 4-yard touchdown to Evan Engram on Jacksonville’s first drive of the third quarter, but the score was nullified due to an ineligible man downfield. The Jaguars settled for Riley Patterson’s 35-yard field goal, punctuating a march that ate 9:14 of the clock.

But Kansas City later went up by 17 as Mahomes and Kelce teamed for a 7-yard touchdown near the end of the third. Kirk’s 19-yard TD catch cut Jacksonville’s deficit to 27-17 with 5:26 remaining, but that was the closest the Jags came.

In the first half, Mahomes’ 13-yard TD strike to Gray gave the Chiefs a 20-point lead with 46 seconds left, but Jacksonville responded with a vengeance.

The Jaguars took just 31 seconds to move 61 yards in five plays, pulling to 20-7 just before the break when Lawrence found Kirk in the end zone from the Kansas City 3.

In the first quarter, Kelce’s 46-yard reception highlighted a five-play, 80-yard drive that ended with Mahomes’ short pass to Toney, who tiptoed along the sideline from 6 yards out for his first NFL touchdown and a 7-0 edge.

After Patterson missed a 51-yard field goal, Mahomes found Valdes-Scantling three plays later for an 18-yard TD to double the Chiefs’ advantage with 9:55 left in the first half.

Kansas City receiver JuJu Smith-Schuster exited the game in the second quarter after taking a hit to the head, forcing him to enter the concussion protocol.