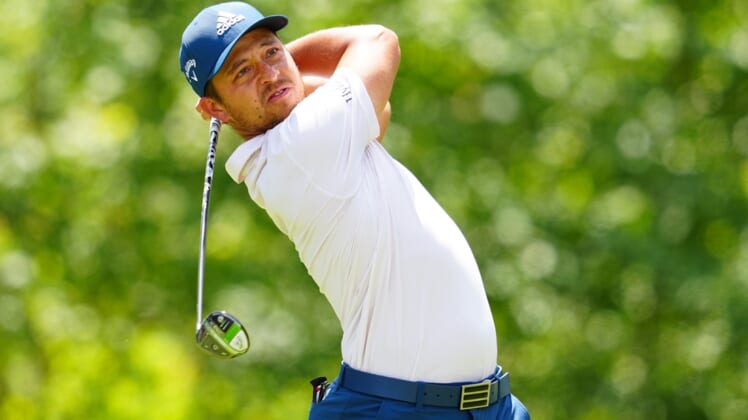 Patrick Cantlay and Xander Schauffele teamed up to shoot a tournament record, 13-under-par 59 in the first round of the Zurich Classic of New Orleans, taking a one-shot lead in the team event Thursday in Avondale, La.

Cantlay sank a 27-foot eagle putt at the par-5 second hole to get their round rolling. They finished with 11 birdies, making birdies on each of the final three holes at TPC Louisiana to set the record.

It won’t go down as an official round of 59, rarefied air on the PGA Tour, but Schauffele will take it all the same.

“Yeah, it counts for me,” Schauffele said. “I haven’t done it before. I don’t think Pat has either. I’ll count it in my book.”

Cantlay and Schauffele lead the team of Matthew NeSmith and Taylor Moore by one shot. Three teams shot 61 to land in a tie for third: Englishman Aaron Rai and David Lipsky; Tommy Gainey and Robert Garrigus; and Doc Redman and Sam Ryder.

In Thursday’s four-ball format, both golfers play each hole and choose the better score between them. On Friday, the field of 80 teams will play alternate shot. After the 36-hole cut, the third round will return to four-ball and the final round will again be alternate shot.

“I wasn’t really thinking about 59 just because it’s best ball,” Cantlay said. “Yeah, I mean, just trying to make a birdie on par-5 like every other week.”

Cantlay and Schauffele are ranked fourth and 12th, respectively, in the Official World Golf Ranking and have 10 PGA Tour wins between them. On the other end of the spectrum are NeSmith and Moore, who are ranked outside the top 150 in the world and have never won on tour.

They rolled into contention with their 12-under 60. The pair only touched 12 under because Moore sank a nearly 25-foot eagle putt at No. 18. Moore revealed that he was in the emergency room Wednesday morning recovering from food poisoning, making Thursday’s performance that much more impressive.

“He’s been putting great all day long,” NeSmith said of his partner. “He’s had the pace right all day. So just striped two shots (at No. 18) and made a great putt.”

The teams of Sam Burns and Billy Horschel, Bubba Watson and Harold Varner III, and Cameron Tringale and Wyndham Clark all fired 10-under 62 for a tie for sixth.

Defending champions Cameron Smith and Marc Leishman of Australia opened with a 7-under 65, as did another powerhouse pairing, Viktor Hovland of Norway and Collin Morikawa.