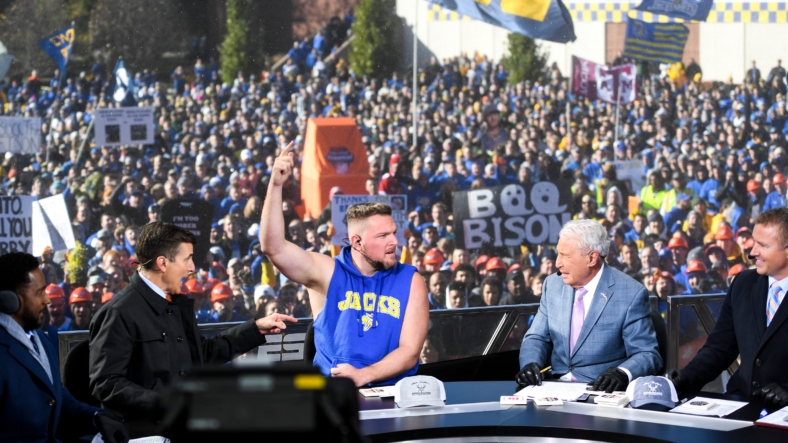 Pat McAfee’s dominance of the media side of the sports and entertainment game has reached an all-new level with the news that the popular podcaster and former Indianapolis Colts great has signed a gigantic multi-show deal with ESPN.

On Wednesday, ESPN announced that the host of “The Pat McAfee Show” had come to terms on a new exclusive deal that will see the energetic talent be a fixture on the panel for the network’s weekly College Gameday broadcasts. The multi-year pact will kick off with the Sept. 10 episode of the Saturday pre-game tradition.

However, that is far from where the relationship between McAfee and ESPN ends. Along with his full-time work on College Gameday, McAfee will also “contribute to ESPN’s coverage of The Rose Bowl Game, and the College Football Playoff Semifinals and National Championship.” He has also signed a separate deal with former teammate Peyton Manning and his Omaha Productions. The same company that produces the popular alternate broadcast series “Monday Night Football with Peyton and Eli” and the new UFC alternate telecast “Gronk Cast.”

Under his arrangement with Omaha Productions, McAfee will host six college football alternate broadcasts. The first will come on Saturday, Oct. 1, and air on ESPN2. But wait, there’s more.

McAfee will also take part in ESPN’s coverage for the Super Bowl, Pro Bowl, and make appearances on morning editions of the network’s show “Get Up.”

The 35-year-old was an All-American at West Virginia who then went on to be an All-Pro punter with the Colts. He retired from the NFL following his eighth year in the league in 2016. Since then he has developed his massively popular “The Pat McAfee Show,” which landed a multi-year deal for $120 million with betting site FanDuel last year.

McAfee has also moonlighted as an analyst for WWE on broadcasts of Smackdown Live on Fox. He has also competed in the ring for the promotion at their yearly stadium events Wrestlemania and Summerslam. However, that relationship is reportedly coming to an end due to McAfee’s new deal with ESPN.