Panthers out for lucky 13 vs. Maple Leafs 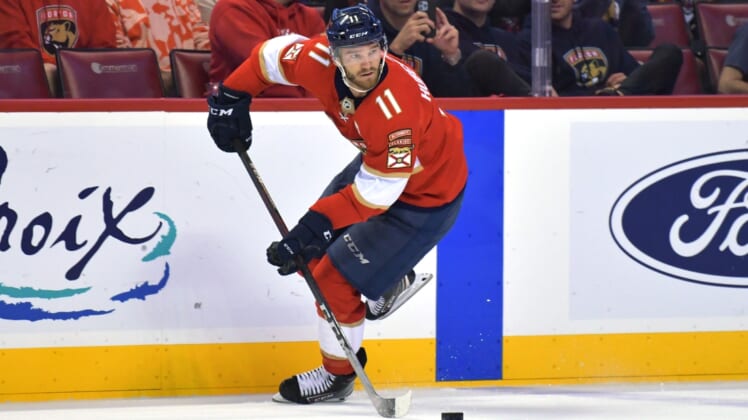 The Florida Panthers will take aim at a franchise-record 13th consecutive victory Saturday night when they meet the visiting Toronto Maple Leafs.

The Panthers defeated the Detroit Red Wings 5-2 on Thursday to extend their winning streak and match the franchise record of 12 straight set from Dec. 15, 2015 to Jan. 10, 2016.

Coupled with the Maple Leafs’ 8-1 road loss to the Tampa Bay Lightning on Thursday, the Panthers have clinched the Eastern Conference’s top seed and have a chance to beat out the Colorado Avalanche for top spot in the league overall.

“Proud of the group,” Panthers interim coach Andrew Brunette said. “It’s been a heck of a year. To (finish with the top record) would be a big bonus. It’s probably not over yet, but, again, with all these little things we just want to keep going, keep building. We’ve got another game Saturday.”

“You don’t have too many times in your career, or in your life, that you can be on a team like this,” Brunette said. “We’re a long, long way to getting to be where we want to be, but (the players) love playing with each other, and they love to compete together. Those are all fun signs.”

Jonathan Huberdeau had two assists Thursday and has 113 points as he contends for the NHL scoring lead with Connor McDavid of the Edmonton Oilers. They were tied for the lead heading into play Friday.

The Maple Leafs will be out to atone for the embarrassing loss to the Lightning on Thursday in what was a possible preview of a first-round playoff series.

“You just get a little sample of how hard you need to play and how well you need to play to be able to beat a team of that quality when they are playing at that level,” Maple Leafs coach Sheldon Keefe said.

In their previous visit to Tampa Bay on April 4, the Maple Leafs won 6-2 with Auston Matthews scoring three goals. Matthews (undisclosed injury) has missed the past three games.

“The way I see it is, the last time we were in here you know how the game went and you saw how their team responded,” Keefe said. “To me it was clear that the game meant more to them than it did to us, and it showed in how they played and how they competed. That’s what happens when that’s the case.”

As the game got away from the Maple Leafs on Thursday, the game became chippy with several skirmishes.

As a result, two Toronto players were fined. Kyle Clifford was fined $2,500 for high-sticking Tampa Bay’s Corey Perry and Wayne Simmonds was fined $2,250 for charging Mikhail Sergachev. The fines were the highest allowed under the collective bargaining agreement.

“We’re disappointed in the way we played,” the Maple Leafs’ John Tavares said. “Just not helping out our goaltender, especially. Second, it’s a good lesson for us going forward to understand the way we need to play, obviously against a team like this.

“They don’t need a whole lot and the game can change really quickly there in the second period after a pretty good first for us.”