Panthers’ odds shift with Baker Mayfield – in both directions 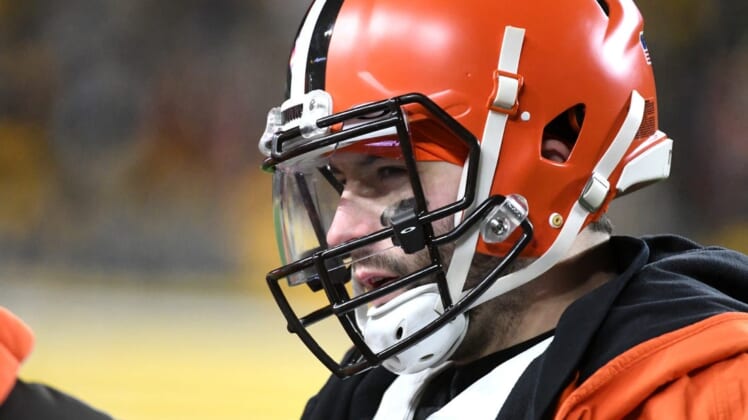 Carolina’s Super Bowl odds also shifted from 150-1 to 125-1 at BetMGM while the Panthers remained unchanged at 125-1 at BetRivers.

FanDuel told Field Level Media that while the Panthers’ Super Bowl odds shortened from +13000 to +10000 after the news broke, “no real significant number of bets” nor any “sizeable bets” had come in by Wednesday evening.

The long-rumored deal finally coming to fruition actually had a negative impact on Carolina’s futures with at least one sportsbook. SportsBetting.ag told Field Level Media that the Panthers’ futures were adjusted across the board: from 125-1 to win the Super Bowl pre-trade to 130-1 after acquiring Mayfield; from 50-1 to 60-1 to win the NFC; and from 10-1 to 11-1 to win the NFC South.

Mayfield will join a quarterback room in Carolina that includes veteran Sam Darnold and rookie Matt Corral. Mayfield was selected No. 1 overall in 2018 – two spots ahead of Darnold, who went to the New York Jets.

“Baker Mayfield doesn’t move the needle in our eyes,” said Robert Cooper, head of NFL trading at the sportsbook. “They have different styles, and I could begrudgingly argue Mayfield is a tiny bit better than Darnold, but at the end of the day they are both below-average NFL players.”

SportsBetting.ag is offering Mayfield at -300 to be the Panthers’ starting quarterback in Week 1 compared to Darnold at +200. Mayfield is the -1200 favorite at DraftKings followed by Darnold (+500), Corral (+5000) and current San Francisco 49ers quarterback Jimmy Garoppolo (+10000).

“I expect (coach Matt) Rhule to make this an open quarterback competition in camp,” Cooper said. “They didn’t give up much, and they’re basically being paid the same salary. Rhule could initially end up going with the QB he coached for a season… a guy he and his receivers are comfortable with.

“Either way, adding Mayfield only creates more headache and drama off the field. He certainly doesn’t make this a better team.”

The Browns, who are awaiting word on a potential suspension for Deshaun Watson by the NFL, saw their Super Bowl odds lengthen from +2500 to +2800 at PointsBet on Wednesday. They also moved from +1200 to +1400 to win the AFC.

The Browns saw no change in their odds at DraftKings, but the sportsbook is offering Cleveland as a 1.0-point favorite in their Week 1 game at Carolina. The sportsbook also created several prop bets for Mayfield ahead of the 2022 season.

The Browns will receive a fifth-round draft pick in exchange for Mayfield, although it could convert to a fourth-rounder depending on his playing time with the Panthers.