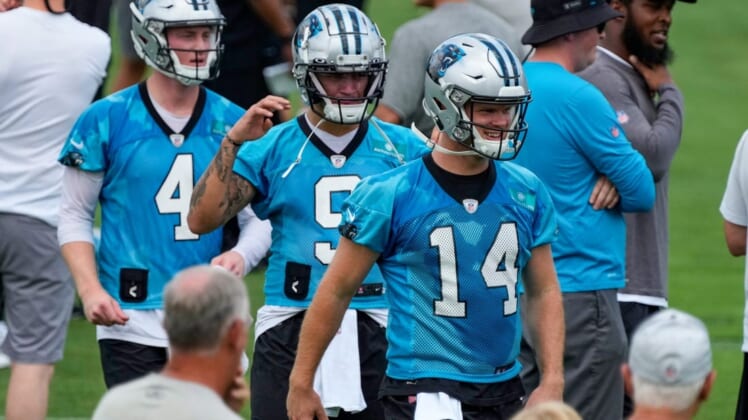 “Sam’s gotten a lot better,” Rhule told reporters at Thursday’s minicamp practice. “Really, really improving in the offense and if we played today, Sam would be our quarterback.”

The vote of confidence for the 25-year-old Darnold sheds a little light on the club’s evolving signal-caller situation.

Carolina has been linked to Cleveland Browns quarterback Baker Mayfield ever since he requested a trade in March. In April’s draft, the Panthers traded up to select Ole Miss signal-caller Matt Corral in the third round. The team also has veteran P.J. Walker and undrafted rookie Davis Cheek on the roster.

“Sam’s job is to take the next five weeks, make sure he shows up to (training camp) better than what he is right now,” Rhule said. “He said to me yesterday how good he feels footwork-wise in the offense. He’s got to get to training camp and improve and he’s got to do it with the pads on with people trying to knock you down.

“You look at the quarterbacking world from high school through college now, it’s so much 7-on-7 a lot of guys can throw it — it’s what you do when guys are trying to chase you down. So, those are his steps. He knows that, I know that, (offensive coordinator) Ben (McAdoo) knows that, that’s our job as coaches is, our job is not to think hey we need to go get this, go get that — that’s (general manager) Scott (Fitterer’s) job — our job is to get Sam as ready as possible.”

Darnold compiled a 4-7 record in his first season with Carolina in 2021, completing 59.9 percent of his passes for 2,527 yards with nine touchdowns and 13 interceptions.