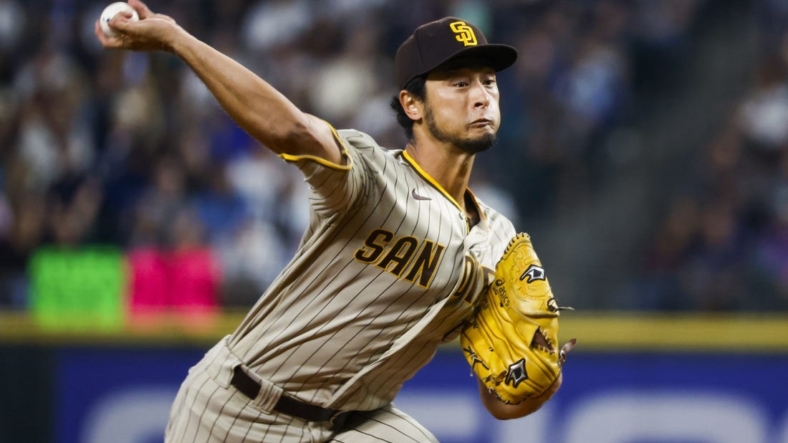 Yu Darvish allowed just two hits over eight innings and Josh Hader picked up his 32nd save as the visiting San Diego Padres defeated the Seattle Mariners 2-0 on Tuesday.

Darvish (14-7) had seven strikeouts and didn’t walk a batter while throwing 94 pitches and lowering his ERA to 3.16. Hader struck out three in the ninth around a two-out single by Julio Rodriguez.

Darvish retired 16 consecutive Mariners between a first-inning single by Eugenio Suarez and a leadoff single by Ty France in the seventh. Darvish then struck out Suarez before getting Carlos Santana to ground into a double play.

The win enabled the Padres (78-64) to retain a two-game lead over the Milwaukee Brewers (76-66) in the race for the third National League wild-card spot. Seattle (79-62) lost for the third time in five games to remain tied with the Tampa Bay Rays (79-62) for the second and third AL wild-card positions.

The Padres got the only run they needed in the fourth. Jake Cronenworth hit an infield single with one out. Wil Myers lined two-out RBI double into the left field corner, with Cronenworth scoring easily from first.

San Diego added a second run in the top of ninth. Austin Nola opened the inning with a single off Paul Sewald. Jurickson Profar followed with a single to center, and Nola moved to third when Seattle center fielder Rodriguez fumbled the grounder for an error. Nola scored on Juan Soto’s slow grounder to the right side.

Although the Mariners had only two hits off Darvish, they came close to tying the game four times in the fourth and fifth innings on drives to the warning track by France, Suarez, Santana and Cal Raleigh. Padres center fielder Trent Grisham caught three of the four, and Profar caught Santana’s drive just feet in front of the wall in left.