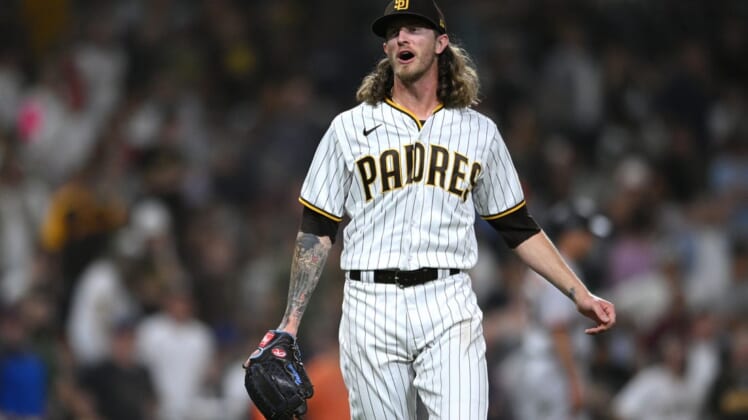 Recent San Diego Padres acquisition Josh Hader was temporarily removed from the closer’s role on Saturday after a disastrous start with the club.

Padres manager Bob Melvin termed it a “break” and said he will use a closer-by-committee based on matchups until Hader is ready to close again.

The left-hander is 1-1 with a 16.20 ERA and 3.00 WHIP in five appearances with San Diego since being acquired from the Milwaukee Brewers on Aug. 1. He blew his only save appearance on Aug. 9 when he gave up three runs in the ninth.

Hader took the loss on Friday when he gave up three runs in the ninth without retiring a batter.

Hader, 28, told reporters prior to Saturday’s game against the Washington Nationals that he is having mechanical issues. He also said he was fine with Melvin’s decision.

“You can’t keep forcing the hand and try to fix things at the same time,” Hader said. “I think it’s a good thing for me to analyze what I’ve been doing and nail it down going into the end of the season.”

“The goal and the mindset is figure out the mechanics and nail it down and feel real confident with what I’m doing.”

Melvin said he has no timetable for Hader’s return to the closer role.

“We’ll have him come in for a couple outings or however long it takes to get him back in that role, but our best team obviously is with Josh Hader in the closer role,” Melvin said. “That’s why we got him. We’ll give him a little break for now.”

This season, Hader was 1-4 with a 4.24 ERA with 29 saves in 31 opportunities prior to the trade that included then-Padres closer Taylor Rogers going to the Brewers.