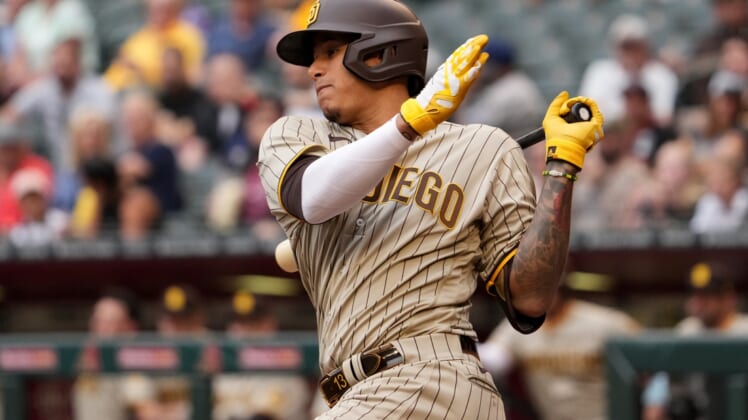 Eric Hosmer lined an eighth-inning single off the glove of Arizona second baseman Ketel Marte on Saturday night to drive in the go-ahead run and lead the San Diego Padres to a 5-2 victory over the Diamondbacks in Phoenix.

The Padres scored a second run in the inning on a sacrifice fly, giving reliever Steve Wilson the victory in his major league debut. Left-hander Taylor Rogers, whom the Padres acquired from Minnesota in a trade on Opening Day, collected his second save in as many nights.

Manny Machado singled off Ian Kennedy (0-1) to open the eighth, then stole second and moved to third on a wild pitch. After Luke Voit drew a one-out walk, Hosmer hit a sharp grounder that ricocheted off Marte’s glove into short right, with Machado scoring and Voit moving to third.

Rookies C.J. Abrams and Jose Azocar collected their first hits in the majors as the Padres added a run in the ninth.

Shortstop Abrams went the other way to open the inning with a sharp single to left off former Padres pitcher Mark Melancon. Abrams moved to second on a passed ball, took third on a ground out and scored on left fielder Azocar’s single past Marte.

Joe Musgrove started for the Padres on the first anniversary of throwing a no-hitter, the first in the team’s history. The right-hander pitched six innings and allowed two runs on five hits with no walks and eight strikeouts.

David Peralta drove in both runs off Musgrove, although Marte got Arizona’s first hit against a Padres starting pitcher in 13 1/3 innings in the series — a one-out single in the first.

Peralta followed with an RBI double to left-center, driving in Marte. Peralta then homered off Musgrove with two out in the sixth to tie the game.

The Padres scored twice in the third off Zach Davies to take a 2-1 lead. Trent Grisham drew a one-out walk but was forced at second on a grounder by Matt Beaty. Beaty then scored on Machado’s double into the left field corner. Machado scored on Jake Cronenworth’s single to center.