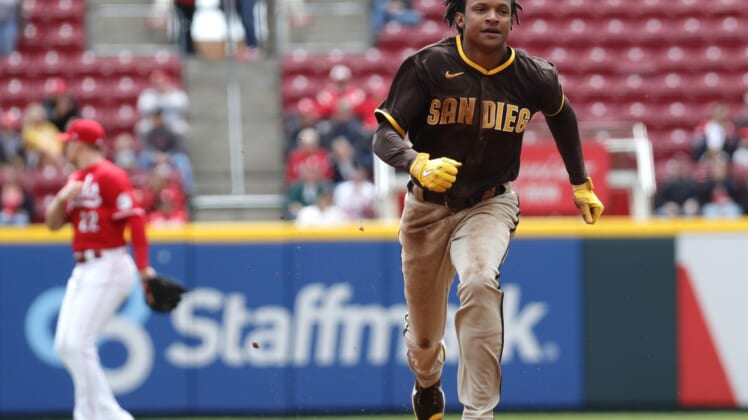 Ha-Seong Kim lined a tie-breaking two-out, three-run double in the sixth inning Thursday afternoon to lead visiting San Diego to a 7-5 win in Cincinnati and giving the Padres a sweep of the six-game season series.

Reds left fielder — and former Padre — Tommy Pham twice made sliding catches along the foul line to end San Diego rallies earlier in the game. But he failed to catch Kim’s liner to short left-center, the ball rolling all the way to the wall.

The Reds scored twice in the fifth to take a 2-1 lead before the Padres’ four-run sixth.

Brandon Drury opened the Reds’ fifth with a double off Padres starter Nick Martinez. Drury scored on a single by Mike Moustakas, who reached base three times in his return from the injured list. Catcher Mark Kolozsvary doubled home Moustakas to break the 1-1 tie.

Manny Machado doubled to open the Padres sixth. After Eric Hosmer drew a one-out walk, reliever Tony Santillan replaced starter Tyler Mahle. Santillan hit Matt Beaty with a pitch to load the bases, gave up a game-tying sacrifice fly to Jorge Alfaro, then hit C.J. Abrams with a pitch ahead of Kim’s double.

The Padres added a run in the top of the seventh on a bases-loaded walk drawn by Alfaro, but the Reds scored twice in the bottom of the seventh after a throwing error by reliever Tim Hill.

The teams exchanged runs in the eighth.

The Padres struck on a double by Kim and an RBI single by Machado. The Reds turned a second fielding error by Abrams and two wild pitches by Luis Garcia to pull within two runs, 7-5.

Martinez (1-2) allowed two runs on five hits and two walks, with five strikeouts in five innings to earn his first win as a Padre. Taylor Rogers earned his seventh save.

Mahle (1-3) gave up three runs on six hits and two walks, with five strikeouts in 5 1/3 innings to take the loss.

Since the start of the 2021 season, the Padres have gone 11-1 against Cincinnati and outscored the Reds 40-19.