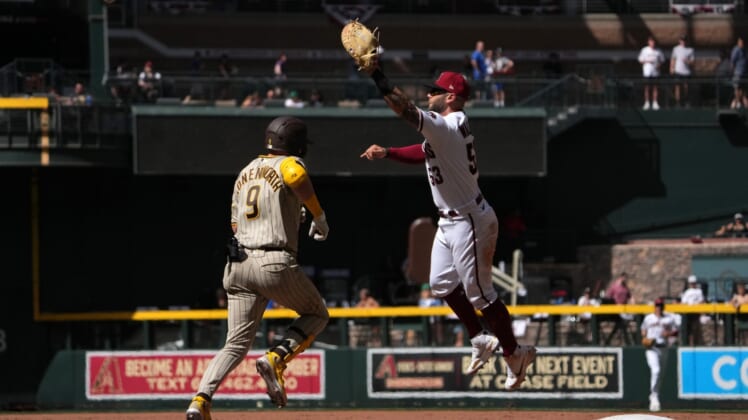 Jurickson Profar hit a grand slam and Jorge Alfaro immediately followed with a solo home run off Arizona starter Caleb Smith in the second inning Sunday, and the visiting San Diego Padres went on to a 10-5 victory over the Diamondbacks.

The Padres won the final three games of the four-game series after Arizona won the season opener on a walk-off homer by Seth Beer.

Two errors, three walks and a hit batter directly led to seven of the Padres’ runs. The Diamondbacks also continued to struggle at the plate, trailing 10-1 until they scored four runs in the ninth.

Sunday’s game started with a bit of controversy. Left-hander Blake Snell was scheduled to start for the Padres and Arizona packed its lineup with six right-handed or switch hitters. But Snell never went to the mound in the first. He was scratched with left abductor tightness.

Right-hander Nabil Crismatt opened the game and allowed no runs on a hit and three walks with four strikeouts in three innings. He departed with a 6-0 lead.

Arizona second baseman Ketel Marte drew an error on Jake Cronenworth’s grounder to open the second. Smith then walked Luke Voit and Wil Myers ahead of Profar’s second career grand slam. Alfaro then went back-to-back with a second straight drive into the seats in left center.

Ha-Seong Kim tripled off Arizona Corbin Martin opening the fourth and scored on Austin Nola’s sacrifice fly. Cronenworth reached on shortstop Geraldo Perdomo’s error in the fifth. After Voit walked, both runners advanced on Myers’ deep fly to right — both scoring on a pair of wild pitches by Martin.

Smith allowed five runs (four earned) on two hits and three walks in an inning-plus to take the loss. Austin Adams (1-0) was credited with the win for the Padres for an inning of scoreless relief.