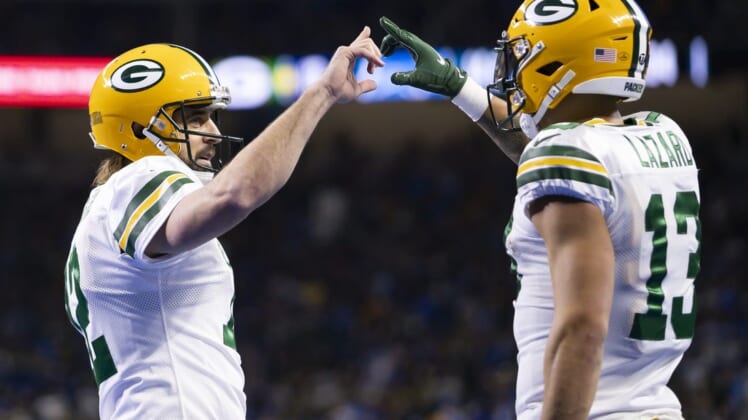 Count Aaron Rodgers among the members of the Allen Lazard Fan Club.

Transitioning from Davante Adams to a new, as yet undefined No. 1 wide receiver in Green Bay, the Packers’ MVP quarterback said Wednesday he believes Lazard is ready for the role.

“I mean it’s always tough going from Hall of Famer to Hall of Famer. From Davante to Allen, it’s gonna be a transition, but he’s capable of a lot,” Rodgers said during an interview in the locker room.

Adams was traded to the Raiders, leaving Rodgers and the Packers to establish a new pecking order in the receiver room.

Green Bay signed Sammy Watkins, a former first-round pick, and veteran slot receiver Randall Cobb is also back but surrounded by questions at the other receiver spots.

Unless you ask Rodgers.

The statement goes beyond just words to media. Rodgers threw a 50-50 pass down the center of the field for Lazard against safety Adrian Amos in Wednesday’s workout at training camp. Lazard focused on the deflected pass and secured the reception while going to the ground and spun it in celebration in the highlight of the on-field work.

“Who I don’t think we need any patience with is Allen. I really think Allen is ready to make a jump and be a No. 1 receiver,” Rodgers said.

General manager Brian Gutekunst said earlier Wednesday that the Packers view Lazard as a lead receiver, adding “The sky is the limit for him.”

A fifth-year pro, Lazard caught 40 passes for 513 yards with eight touchdowns in 2021, including four TDs in the final three regular-season games.

The 26-year-old has 109 receptions in 42 career games (25 starts) — or the type of production Rodgers and the Packers expected from Adams in one season.

The undrafted player joined the Packers from the Jacksonville Jaguars’ practice squad in 2018 and is playing this season on the restricted free agent tender of $3.986 million.

“He’s been our dirty work guy for most of his career here,” Rodgers added. “Now he’s getting an opportunity to be a No. 1 receiver.”