Out of playoff hunt, Senators, Red Wings focus on development 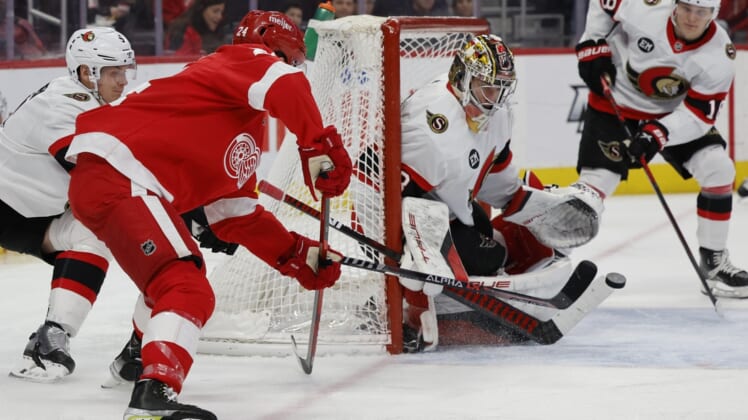 Neither the Ottawa Senators nor the Detroit Red Wings are in a position they would have hoped for at the start of the year: already eliminated from playoff contention entering their final 10 games of the season.

But that’s the reality for each club, so now the Senators and Red Wings are hoping to simply build momentum for next season in their remaining games, starting when they meet for the third time this season Tuesday in Detroit.

The host Red Wings enter playing better of late, having earned points in each of their last three games (2-0-1).

Detroit earned wins over Boston and Winnipeg before losing in overtime on Saturday to Columbus.

Detroit (28-34-10, 66 points) was officially eliminated from the hunt after Saturday’s loss, combined with the Washington Capitals’ win that day.

“That was obviously disappointing news,” Red Wings captain Dylan Larkin said. “We were close, but it doesn’t count. It’s another season not in the playoffs. We’ve got to string together these last games to figure out how to win games and it starts with the next game.”

If there’s a silver lining, it’s that the recent three-game stretch has been much better for Detroit, which won just three of 18 games (3-12-3) prior to that.

“I’ve liked the fact that in the last three games we’ve had good fight,” Detroit head coach Jeff Blashill said. “In the end, none of us want to be in this spot. We all want to be a team that’s fighting for a playoff spot right now. We’ve put a lot of people in positions to potentially grow. At times they have, and at times it’s gotten stagnant.

“Ultimately, you hope as some of those young people in lots of different positions go through these different experiences, they become better players on the other side of it.”

Detroit hopes a good finish to the season can be a springboard into next year, particularly since the Red Wings possess two of the league’s top rookies in defenseman Moritz Seider and forward Lucas Raymond.

Building toward next year is also an objective for Ottawa (26-40-6, 58 points), which comes in on a three-game losing streak.

Prior to those three losses, Ottawa had won three straight, including back-to-back 5-2 wins over the Red Wings on April 1 and 3.

Much like Detroit, Ottawa wants to use the remaining games of the regular season to give younger players a chance to see how they can potentially fit into the plans of the organization going into next year.

One player Ottawa is excited about is rookie goalie Mads Sogaard, who made his first career home start in a 4-3 loss to Winnipeg on Sunday.

“He’s going to be a real good goalie,” Ottawa head coach D.J. Smith said. “The goalie coach will judge him, but we’re not judging him good, bad or indifferent. This is about experience for him.”

Sogaard earned the win at the Red Wings in his first NHL start on April 1, making 27 saves.

This will be the final meeting of the season between the two Atlantic Division rivals.