Orioles’ Kyle Bradish strikes out 11 in win over Cardinals 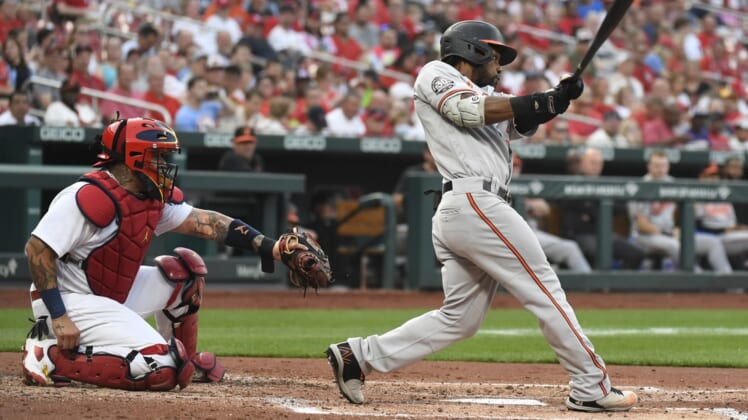 Bradish (1-1) held the Cardinals to four hits. Harrison Bader’s two-run inside-the-park homer was the only damage against him.

Felix Bautista got the final out, striking out Tyler O’Neill and stranding two runners, to earn his first career save.

Cedric Mullins hit a two-run homer and Tyler Nevin hit a solo shot for the Orioles, who won for the seventh time in 10 games.

With Adam Wainwright still in COVID-10 protocols for the Cardinals, Packy Naughton (0-1) got a fill-in start. He allowed three runs on five hits in 3 1/3 innings as the Cardinals lost their third straight game.

The Orioles took a 2-0 third-inning lead when Chris Owings hit a double and Mullins launched his two-run homer.

Nevin made it 3-0 in the fourth inning with his solo homer. Then the Orioles tacked on a run in the fifth inning and threatened to do more.

Mullins hit a one-out single, Trey Mancini was hit by a pitch, and Anthony Santander hit an RBI double to boost Baltimore’s lead to 4-0. Ryan Mountcastle walked with two outs to load the bases.

Nick Wittgren came on to strike out Nevin to strand the runners.

The Orioles made it 5-0 in the sixth inning despite botching a sacrifice play. With runners on first and second and nobody out, Owings popped up his bunt.
Wittgren let it drop, then turned it into a double play. But Baltimore later scored on Mancini’s RBI single.

The Cardinals countered in their half of the inning when Yadier Molina hit a double and Bader hit his inside-the-park homer off the left-center field wall to cut the deficit to 5-2.

The inside-the-park homer was the team’s first since Fernando Vina hit one on Oct. 2, 2001 at Milwaukee.

Brendan Donovan hit his first career homer, a solo shot, in the ninth inning cut the lead to 5-3.