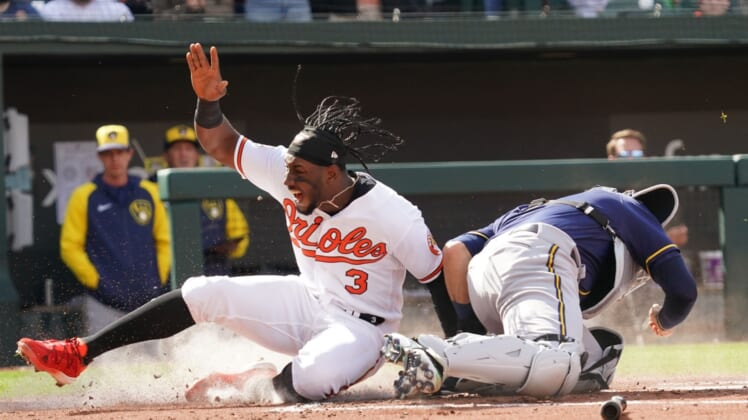 Cedric Mullins drove in two runs and Bruce Zimmermann and four relievers combined to toss a six-hit shutout as the Baltimore Orioles celebrated their home opener with a 2-0 win over the Milwaukee Brewers on Monday.

Jorge Lopez worked around a one-out walk in the ninth for his second career save and first since 2019.

Milwaukee is off to a 1-3 start after dropping two of three games over the weekend to the Chicago Cubs. The Brewers left nine men on base and went 0-for-6 with runners in scoring position.

Milwaukee starter Adrian Houser (0-1) gave up two runs on four hits over 3 2/3 innings. He struck out three with three walks.

Anthony Santander had two hits and reached base four times for Baltimore, which earned its first win after losing three straight in its season-opening series against the Tampa Bay Rays.

After going 2-for-24 with runners in scoring position in three games over the weekend, Baltimore struck early against the Brewers.

The Orioles took their first lead of the season in the second inning against Houser. Ramon Urias hit a leadoff single and Jorge Mateo drew a two-out walk. After Mateo stole second, Robinson Chirinos walked to load the bases for Mullins, who knocked in two runs with a single to center field.

Milwaukee loaded the bases with two outs in the third before Hunter Renfroe bounced into a fielder’s choice to end the inning.

Renfroe is 1-for-14 with five strikeouts to begin the season for the Brewers, who are making their first visit to Baltimore since 2003.

Milwaukee threatened again in the seventh and had runners at the corners with two outs before Willy Adames lined out against Tate to end the inning.