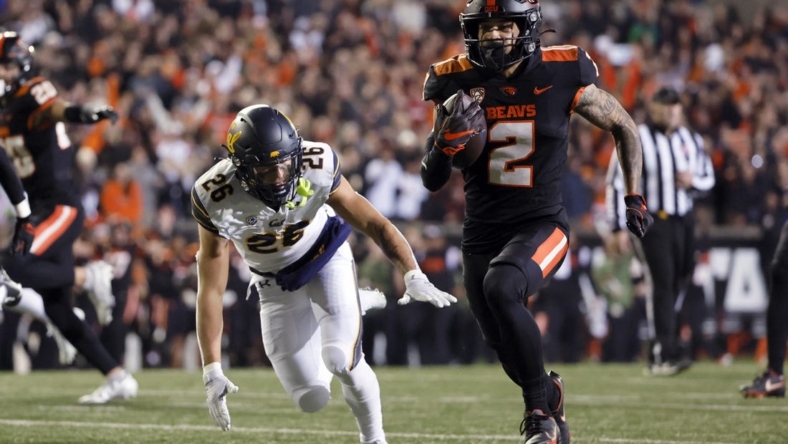 Ben Gulbranson threw for two touchdowns and ran for a third Saturday night as Oregon State established a 21-0 second quarter lead en route to a 38-10 win over California in Corvallis, Ore.

Gulbranson completed 15 of 23 passes for 137 yards in a performance that was more efficient than spectacular, but perfectly fine considering how tough the Beavers’ defense was against the pass-happy Golden Bears.

Oregon State allowed just 160 total yards, with only nine on the ground. Prolific Cal quarterback Jack Plummer hit on 22 of 34 attempts, but for just 151 yards with an interception.

The Beavers (7-3, 4-3 Pac-12) got a solid performance from running back Damien Martinez, who rushed for 105 yards on 23 carries. Oregon State finished with 362 total yards and controlled the ball for more than 36 1/2 minutes.

Gulbranson initiated the scoring with a 1-yard sneak with 5:37 left in the first quarter, capping a 65-yard drive that lasted almost five minutes. The Beavers made it 14-0 less than 3 1/2 minutes later on a 5-yard run by Jam Griffin, six plays after Plummer tossed an interception at the Bears’ 31.

The lead grew to 21-0 at the 12:01 mark of the second quarter when Anthony Gould slalomed through Cal’s punt coverage team on a 55-yard touchdown.

The Bears managed their only touchdown with 2:33 remaining in the half when Jeremiah Earby picked up a Martinez fumble and sped 33 yards down the right numbers.

Any thoughts of a second-half rally for Cal (3-7, 1-6) were quashed when Everett Hayes boomed a 49-yard field goal and Gulbranson hit Tre’Shaun Harrison for an 8-yard scoring strike for a 31-7 lead in the third quarter.

Michael Luckhurst booted a 36-yard field goal 2 1/2 minutes into the fourth quarter to round out the Bears’ scoring, while Gulbranson capped Oregon State’s onslaught with a 2-yard touchdown pass to Jack Velling with seven minutes remaining.