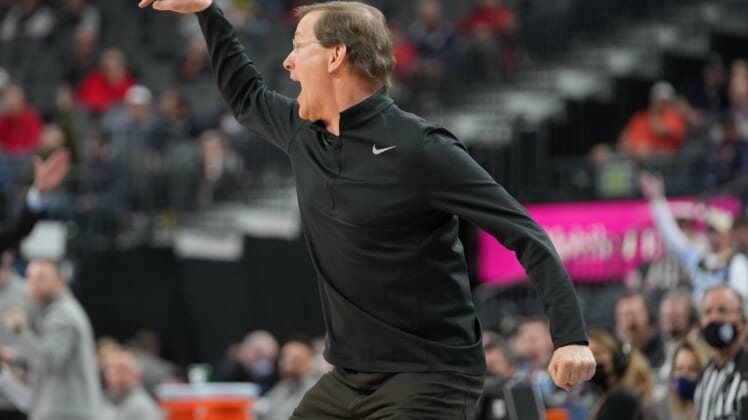 The Ducks were without leading scorer Will Richardson and their offensive big man, N’Faly Dante, both out with non-COVID illnesses. But they held the home team to 38.5 percent shooting and dominated in points in the paint, 48-28.

Quincy Guerrier’s 3 out of the corner gave Oregon a 50-42 advantage at the 14:59 mark, and the Ducks extended the lead to 13. When Eric Williams Jr. put down a follow dunk of Lok Wur’s missed 3, Oregon led 63-50 with just over eight minutes to play.

That signaled the end for the fourth-seeded Aggies (18-16), despite 20 points from Steve Ashworth and 15 from Brandon Horvath.

Oregon stayed hot down the stretch, leading by as many as 17 points and outscoring Utah State 50-35 in the second half.

The Ducks hit their first five shots of the game and rolled out to a 10-2 lead, only to have the Aggies knock down three straight 3s for a 13-10 advantage.

An 11-0 run by Utah State had the home crowd going wild and the Ducks down 32-23 with 4:41 to go in the half. During that stretch, Oregon’s Isaac Johnson was given a technical foul for shoving the Aggies’ Max Shulga in the back going up the court, and the Ducks teetered on the edge of losing their composure.

They regained it, however, as Harmon scored nine of Oregon’s 10 points after that, and the Aggies held just a 37-33 lead at halftime.

Oregon has won at least 21 games in each of coach Dana Altman’s 11 seasons, so the Ducks need another win to get to that mark. They will have to defeat top-seeded Texas A&M next to get to 21 wins.