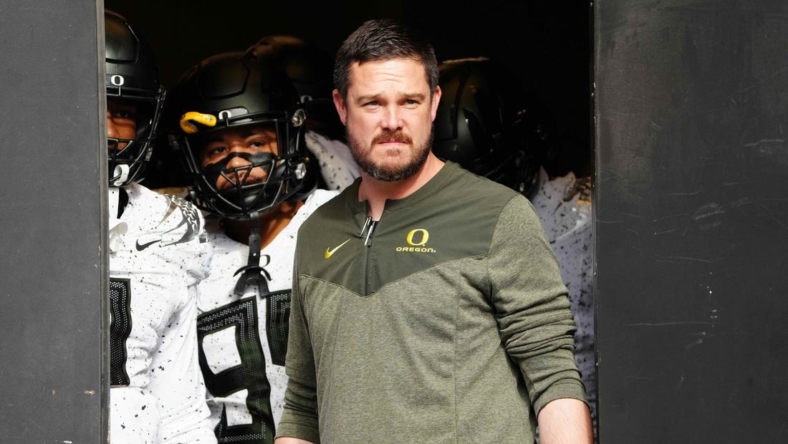 A report came out Sunday that linked Oregon coach Dan Lanning to the vacant job at Auburn. On Monday night, Lanning unlinked himself from the Southeastern Conference job he might otherwise be suitably prepped to take.

Lanning is nine games into his tenure at Oregon, sitting at 8-1 overall, and 6-0 in the Pac-12, good for first place. His Ducks are primed to move up from last week’s No. 8 slot when the latest College Football Playoff rankings are unveiled Tuesday night.

Still, Lanning was forced to address rumors from an Auburn-produced fan site that there’s mutual interest between the school and the former Nick Saban assistant.

“The grass is not always greener,” Lanning, 36, said about the report. “The grass is damn green in Eugene. I want to be here in Eugene for as long as Eugene will have me.

“… Oregon checks every box for me,” he added. “Hopefully that’s the last time I have to address it, but the reality is this is a destination, not just for me but for elite players.”

Auburn fired football coach Bryan Harsin last week after one-plus seasons and a 9-12 overall record. Carnell “Cadillac” Williams, a former All-American at the school, is the interim head coach for the remainder of the season.

Lanning was a graduate assistant to Saban in 2015 and eventually made his way to being Kirby Smart’s defensive coordinator at Georgia from 2018-21. Lanning coached the Georgia defense that went on to win the national championship last season.

Oregon’s only loss this season was a 49-3 thumping at the hands of Smart’s Bulldogs on Sept. 3 in the opening week.