The opening week of the NFL season saw many surprise performance. Who in their right mind thought Kansas City Chiefs rookie running back Kareem Hunt would torch the defending champs for 246 total yards and three scores? That was an absolute shocker.

In the NFC, Detroit Lions rookie receiver Kenny Golladay went off for two scores against what has been an elite Cardinals secondary. Will he provide an encore here?

Checking in on the Week 2 NFL slate, here is one unheralded player for each game set to star. 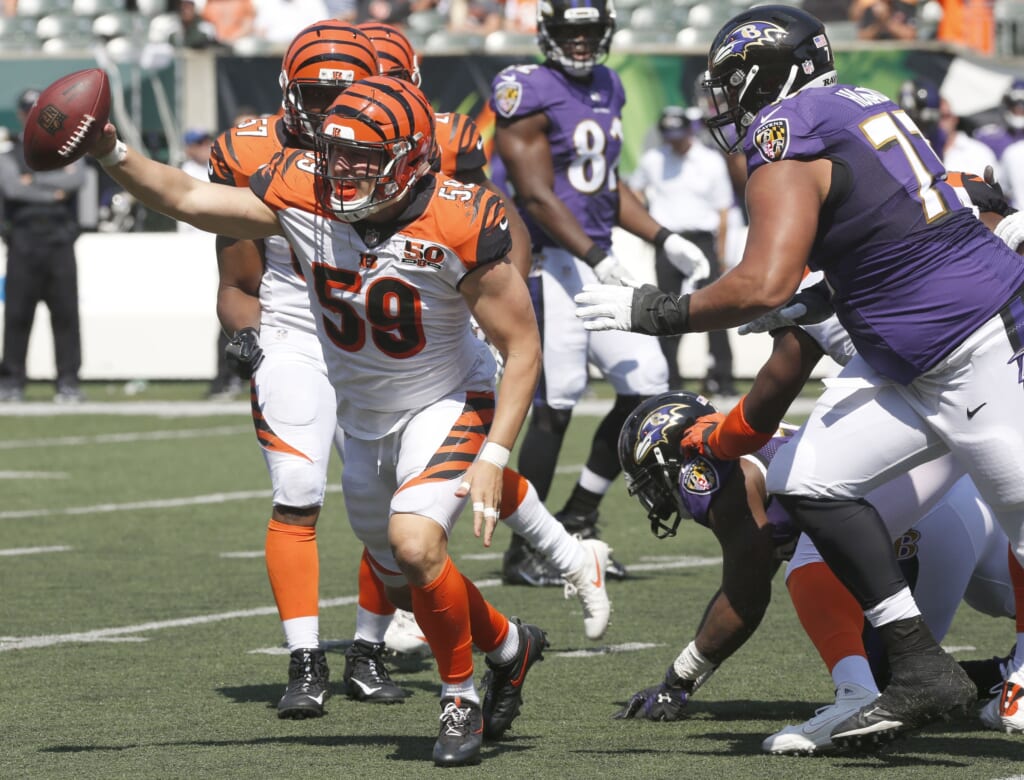 In his first season as a full-time starter, this former Utah State star jumped on to the scene big time. Vigil recorded nine tackles, one pass defended and an interception in an otherwise horrendous Week 1 performance for the Bengals. Set to take on a Texans offense that was equally as bad in its season debut, look for Vigil to put up another good performance here.

We’re pretty sure Tolbert will want to prove to his former Panthers team that he still has something left in the tank. And now, acting as LeSean McCoy’s primary backup in Buffalo, that opportunity will come on Sunday. The former Pro Bowler tallied 42 yards and a touchdown in Week 1’s win over the New York Jets.

Now that Kevin White is lost for the season, Chicago will have to rely on lesser-known receivers to make an impact for Mike Glennon in the passing game. We know rookie running back Tarik Cohen will be involved in the passing game, but look for Bellamy to have an impact in Week 2. He caught three passes for 24 yards on four targets in Week 1.

Like clockwork, James stepped up his game after the Steelers traded for Vance McDonald earlier this summer. In his regular season debut, the starting tight end caught two touchdown passes from Ben Roethlisberger in the Steelers’ narrow Week 1 win over Cleveland. All said, James tallied six catches for 41 yards and those two scores on eight targets. 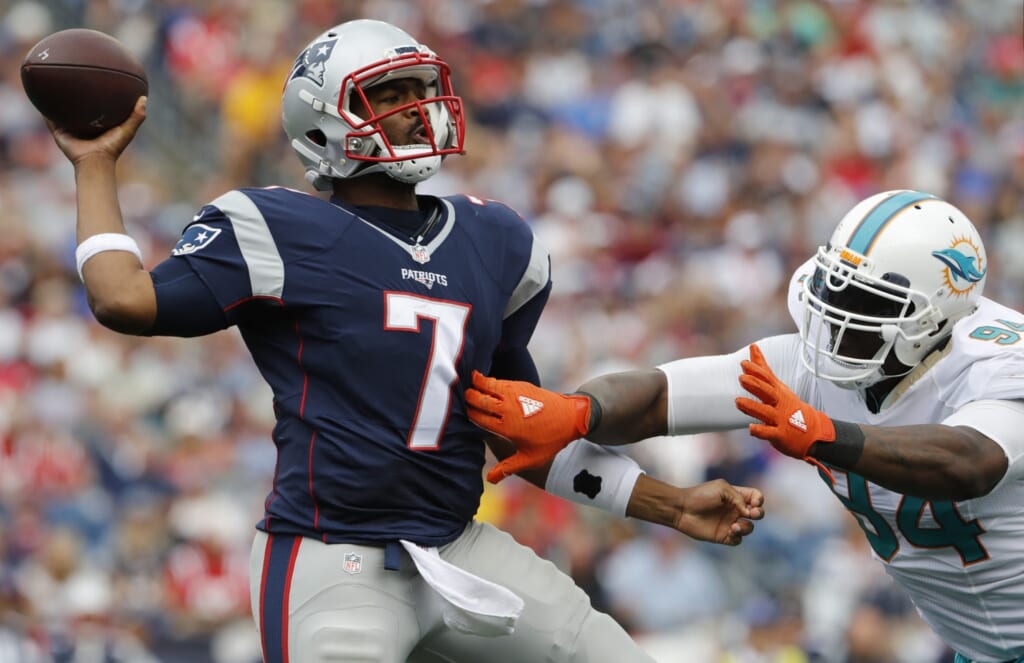 We’re not expecting Scott Tolzien to see the field Sunday against Arizona. You can’t throw two pick-six’s in one game and expect to retain your starting job. Despite splitting reps this week, Brissett will likely see most of the action. And taking on a Cardinals team that yielded four Matthew Stafford touchdowns in Week 1, he’ll be an improvement over Tolzien.

Marsh was seemingly a fish out of water in his first game as a member of the Patriots. It makes sense considering he was just acquired from Seattle prior to the start of the regular season. Though, the Pats are left relying on him with other issues upfront. Having recorded three sacks in limited playing time last season, there’s definitely a track record here. It also doesn’t hurt he’s taking on a Saints team that will be without its two starting tackles. Ouch.

With Danny Woodhead now on injured reserve, look for an uptick in usage for Allen. That came out in a big way in Week 1, with this former USC star actually getting more touches than starter Terrance West. In the end, Allen gained 71 yards on 21 attempts. Set to take on a Browns defense that ranked 31st against the run last season, look for a big game from Allen here.

Sorensen will take over as the Chiefs’ starting strong safety with Eric Berry lost for the season. A four-year vet from BYU, he has only started one game in his career prior to this week. Though, Sorensen did record three interceptions in limited time last season. Look for an impact performance for him in his starting debut this season.

Much like Kansas City, the Titans lost their starting strong safety for an extended period when Johnathan Cyprien went down with  hamstring injury in Week 1. He’ll now be replaced in the lineup by a veteran in Searcy who has started 40 games over the past three seasons. Look for the seven-year veteran to have a huge role in limiting Jaguars rookie running back Leonard Fournette this week. 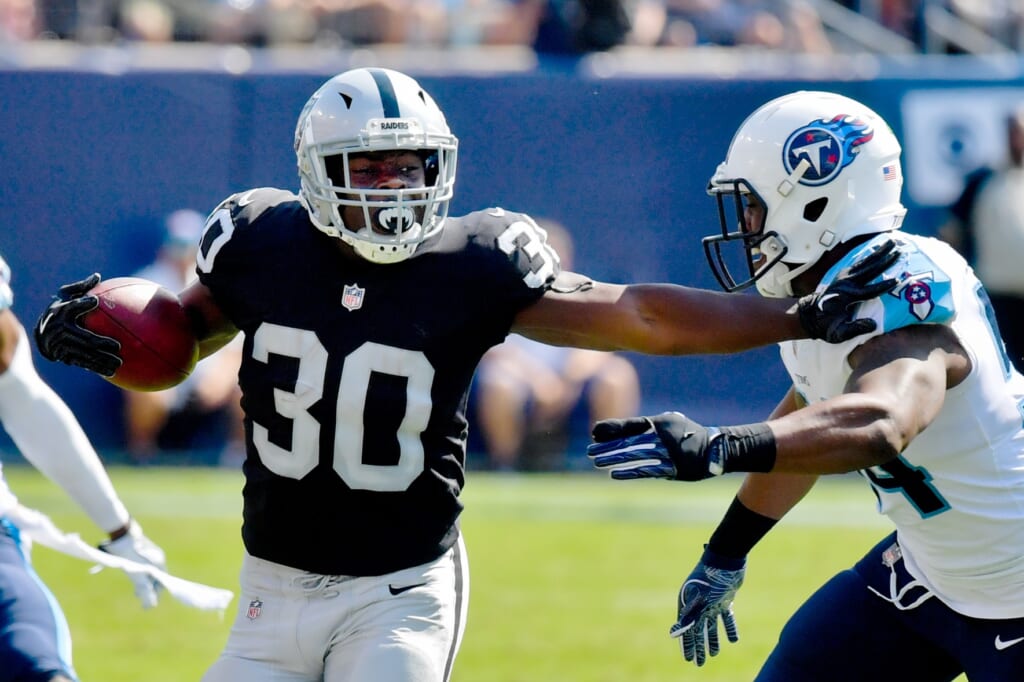 Marshawn Lynch gets most of the play in Oakland. And for good reason. But this second-year back has done nothing but produce since entering the league last season. A home-run threat every time he touches the ball, Richard is averaging 5.8 yards on 88 attempts in his young career. He’ll explode Sunday against a Jets defense that yielded 190 rushing yards to Buffalo last week.

It surprised many draft experts when this former Iowa standout fell to the fifth round back in April. Sure there were concerns over his ability to play corner, but most figured King would make a smooth transition to safety. During the preseason and Week 1, that’s exactly what happened. A play-maker in every sense of the word, King already made a stellar near game-changing play in Week 1. Expect much of the same in Week 2 against a turnover-prone Jay Cutler.

Dallas surprisingly generated a solid pass rush in its blowout win over the Giants in Week 1. Most of it surrounded Demarcus Lawrence absolutely dominating Bobby Hart, but Tapper has proven himself to be a solid young pass rusher in his own right. The second-year defensive end from Oklahoma recorded one sack and multiple pressures of Eli Manning in Week 1. Against a questionable Broncos offense line on Sunday, we can expect the same thing.

Scrappy. A lunch pail guy. We’ve heard the comparisons for receivers of Taylor’s ilk in the past. Most recently, Cooper Kupp of the Los Angeles Rams (more on him next) comes to mind. But Taylor has earned the 49ers’ starting slot job after being selected in the fifth round of April’s draft. After a strong preseason, he was only targeted once against Carolina. That will change Sunday against a Seahawks team that allowed fellow slot guy Randall Cobb to catch nine passes last week.

Speaking of Kupp, we can already draw the conclusion that he is Jared Goff’s favorite receiver in Los Angeles. That came out in a big way in Week 1 when the rookie caught this touchdown from the second-year quarterback. In all, the Eastern Michigan product caught four passes for 76 yards on six targets in his regular season debut. He’ll be heavily featured against a suspect Redskins pass defense on Sunday.

Ty Montgomery did nothing of real substance in his first game as a full-time running back last week. The former receiver averaged just 2.8 yards per rush against Seattle. While Green Bay will continue giving Montgomery more opportunities, this rookie form BYU was solid during the preseason and saw action in Week 1. We wouldn’t be surprised if he saw a heavier load in Week 2.

Calvin Johnson Jr.? Okay, it’s a bit too early for that. But this rookie mid-round pick dazzled onlookers during the preseason before catching two touchdown passes from Matthew Stafford in Week 1. Already the team’s No. 3 receiver ahead of T.J. Jones, we expect continued progression from Golladay here. Look for another tremendous performance as he makes a name for himself as a rookie.