As training camps get started around the National Football League, teams are hoping that moves they made over the past several months will pay dividends on the practice field, and ultimately in games.

Unfortunately for the 12 playoff teams from a season ago, a few will not sniff the postseason in 2015. It’s just the nature of the beast in the salary cap era. From a squad in Detroit that’s missing talent at running back to the defending champion New England Patriots potentially set to struggle without average cornerback play, here is one Achilles heel for each squad coming off playoff seasons.

Dalton, who has yet to win a single playoff game in four starts, will definitely be feeling the pressure in 2015. While Dalton did just sign a six-year, $96 million extension with Cincinnati last year, he will have only $7.2 million in dead money after this year—meaning it could be a make-or-break campaign for the signal caller. Flush with a ton of weapons on offense, Dalton still managed just 3,398 passing yards with 19 touchdowns and 17 interceptions last season. Similar numbers will indicate that the Bengals haven’t taken the necessary step from perennial first-round playoff losers to conference championship contenders. In reality, Dalton needs to step his game up big time in 2015.

On the field, the loss of Troy Polamalu to retirement might not be a big deal. His talents were regressing in a big way in recent seasons. Though, the future Hall of Famer’s leadership skills will sorely be missed. With Polamalu gone, the likes of Mike Mitchell and Shamarko Thomas will start at safety. In addition to this, Cortez Allen and William Gay are slated to get the starting nods at corner with Ike Taylor also gone from the team. For what it’s worth, Mitchell allowed a 75 percent completion rate when targeted last season. Not exactly a stat that’s friendly to his coverage skills from the free safety position. If Pittsburgh is to contend for a conference championship, this aspect of an otherwise solid defense must step up big time. If not, we could be looking at another one-and-done scenario for Big Ben and company. 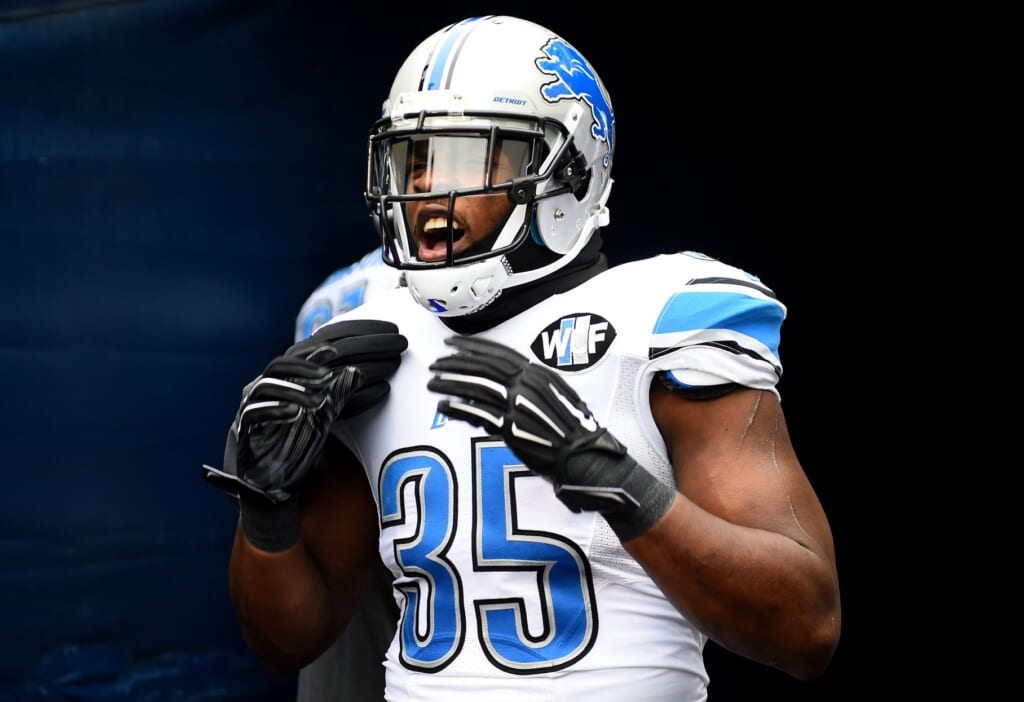 Courtesy of USA Today Sports: Joique Bell is not a starter-caliber running back.

Outside of adding a smallish running back in Ameer Abdullah in the draft, Detroit didn’t do a darn thing to address this weakness in the offseason. Gone is Reggie Bush after an injury-plagued 2014 season. With him off the roster, Joique Bell will likely get a majority of the reps behind Matthew Stafford in the backfield. Unfortunately for Detroit, Bell “led” the fifth-worst rushing attack in the NFL last year at less than four yards per attempt. As we have seen in the past, Stafford is an above-average quarterback only when he has balance on offense. If that doesn’t happen in 2015, Detroit will not catch the Green Bay Packers in the NFC North and may very well fall behind the up-and-coming Minnesota Vikings.

Arizona signed Jermaine Gresham late last week. In a sign of just how bad the tight end position is in the desert, Gresham may very well be the Week 1 starter. Outside of that, returning Cardinals tight ends combined for a total of five receptions last season. Carson Palmer may have the talent at running back and receiver, but he’s going to need to have some type of consistent receiving threat at tight end with opposing defenses focusing on the outside. If that doesn’t happen, the middle of the field could be a major issue for Palmer and company.

With starting left tackle Ryan Clady out for the season and Orlando Franklin now suiting up for the division-rival San Diego Chargers, Denver lost its two best offensive linemen in the matter of months. And while Peyton Manning does a tremendous job getting rid of the ball in a timely manner, this could hurt the timing in Gary Kubiak’s new offense. Ryan Harris and rookie Ty Sambrailo will be competing for the left tackle job while it looks like veteran Shelley Smith will start at left guard. That’s not necessarily an ideal scenario for a quarterback that needs to remain upright in order to lead Denver to the division title.

Steve Smith is the one consistent for Baltimore at wide receiver. Outside of that, it’s a whole bunch of questions with very few answers. Will rookie first-round pick Breshad Perriman step up into a starting role? If not, can Marlon Brown overcome what was a disastrous 2014 campaign that saw him catch just 24 passes for 255 yards? Other mediocre options include Michael Campanaro, Jeremy Butler and rookie DeAndre Carter. Outside of Smith, returning Ravens receivers combined for 55 receptions a season ago.

It’s pretty stunning that Dallas didn’t do much to upgrade what was a poor starting safety duo last season. Barry Church and J.J. Wilcox are slated to start at this all-important position once again in 2015. According to Pro Football Focus metrics, both starters graded out in negative territory last season (subscription required). Overall, they combined to let opposing quarterbacks complete over 68 percent of the passes thrown in their direction last year. That’s not going to cut it for a secondary that also has two struggling corners in Brandon Carr and Morris Claiborne likely set to play roles in 2015. Unless rookie first-round pick Byron Jones gets some play at safety, this is going to be one of the few weaknesses on an otherwise talented roster.

It’s quite possible that Jonathan Martin and Michael Oher will be Carolina’s two starting offensive tackles this season. Needless to say, that’s a less-than-ideal scenario for quarterback Cam Newton. Even if Mike Remmers earns one of the starting gigs, protection promises to be a major issues for Newton on the outside. And while second-year guard Trai Turner has some upside, that position is yet another concern. In order for Carolina to live up to its expectations, a ton of under-performing or previously inexperienced offensive linemen will have to step up. Unfortunately, that’s the situation Carolina put the newly-extended Newton in by pretty much ignoring the line in the draft.

New addition Trent Cole could very well fix this issue. Though, the 32-year-old veteran has seen his production dip a great deal since boasting double-digit sack campaigns from 2009-2011. Outside of Cole, Indianapolis is likely going to have to rely on former first-round pick Bjoern Werner to step his game up big time in 2015. In two seasons since being drafted No. 24 overall, the Florida State product has put up a total of 6.5 sacks. That type of production will not get it done if the Colts are looking to contend for a Super Bowl in 2015. 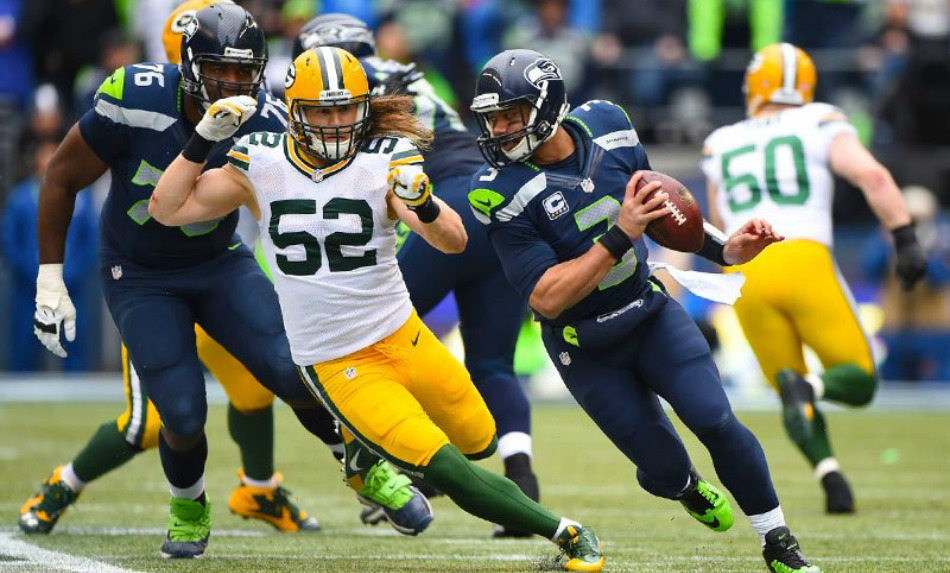 Courtesy of USA Today Sports: Who will help Clay Matthews at linebacker?

With Clay Matthews slated to start at inside linebacker again in 2015, there has to be concern that Green Bay won’t be able to put up much of a pass rush from outside linebacker. While Julius Peppers did tally seven sacks last season, it’s hard to imagine him doing much more than that at the age of 35. Mike Neal, Nick Perry and Jay Elliott will likely compete for the other outside linebacker job. Meanwhile, a whole host of inexperienced youngsters will look to start opposite Matthews inside. Based on its 3-4 defensive scheme, Green Bay simply needs to get better linebacker play if it’s going to contend with the top teams in the NFL.

How much longer can Russell Wilson avoid injury behind what is one of the most talent-stricken offensive lines in the NFL? Seattle also didn’t do itself any favors here by sending Pro Bowl center Max Unger to the New Orleans Saints in the Jimmy Graham deal. Outside of an injury-plagued Russell Okung at left tackle, there’s not much to write home about here. Right tackle Justin Britt graded out as the worst starter at his position in the NFL last season. He also allowed a ridiculous 38 quarterback hurries on the season (via Pro Football Focus, subscription required). Heck, both of Seattle’s starting guards, James Carpenter and J.R. Sweezy, were less than average performers in 2014. In order to keep Wilson healthy and upright, the quarterback needs to see more protection from the line. Based on the talent here, that’s a highly unlikely scenario.

Darrelle Revis, Kyle Arrington and Brandon Browner were New England’s three top corners last season. All three are with new teams in 2015. Heck, even Alfonzo Dennard is gone. In true Patriots fashion, the team didn’t do much to replace these departed veterans. In reality, they are simply expecting their scheme to work to their advantage here. And while that has been successful in the past, there just isn’t much talent. Logan Ryan will likely take over as the top corner with free-agent signing Bradley Fletcher looking to get more time than he deserves. Unless Super Bowl hero Malcolm Butler steps up in a big way, this is going to be a major Achilles heel for a team that has seen the gap between itself and the rest of the AFC East narrow significantly in the past several months.