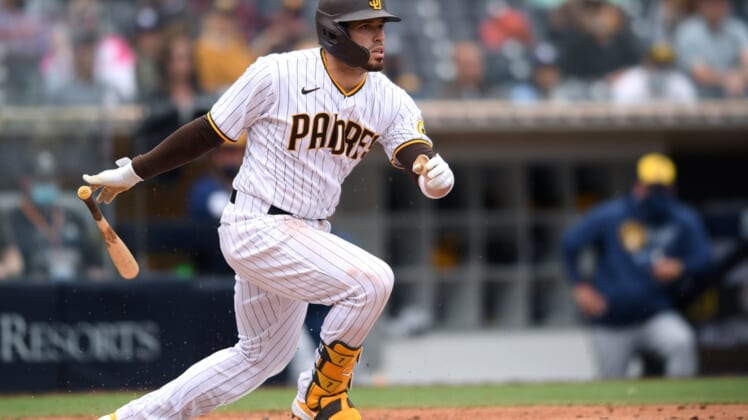 But the fifth defeat in a six-game homestand wasn’t the worst news for the Padres.

Right-hander Dinelson Lamet, who posted a 2.09 ERA in 2020 and finished fourth in the National League Cy Young Award voting, departed after pitching only two innings in his 2021 debut with forearm tightness. Lamet, who missed 2018 due to Tommy John surgery, missed the 2020 playoffs due to an elbow injury. Lamet allowed a hit and a walk while striking out four while throwing 29 pitches.

The Padres were leading 2-1 going into the sixth when Travis Shaw drew a lead-off walk from Keone Kela, the fifth of eight pitchers deployed by the Padres. Narvaez then pulled a homer into the seats in right. Former Padre Peterson connected with his second homer in as many games, giving the Brewers five home runs for the series.

The Padres took a 1-0 lead in the third off Brewers starter Adrian Houser. Victor Caratini opened the inning with a double and scored on Trent Grisham’s single. Milwaukee tied the game in the fourth on a single by Narvaez, a walk and a two-out single by Peterson.

The Padres regained the lead in the bottom of the inning as Jurickson Profar opened it with a double off Houser and came around on a pair of infield groundouts.

Left-hander Brent Suter (1-1) struck out all four Padres he faced in relief of Houser to earn the win. Kela (2-1) took the loss. Josh Hader picked up his third save, striking out Eric Hosmer to end the game with the tying runs in scoring position.

The Padres had also loaded the bases with no one out in the eighth against Brad Boxberger on two walks and a single. But Boxberger got a called third strike against Tommy Pham on a fastball down the middle, and J.P. Feyereisen followed with swinging strikeouts of pinch-hitter Wil Myers and Victor Caratini.

Brewers pitchers held the Padres to 15 hits with 35 strikeouts over the three games. The Padres were 1-for-12 with runners in scoring position Wednesday, 2-for-22 for the series and 9-for-57 for the homestand.