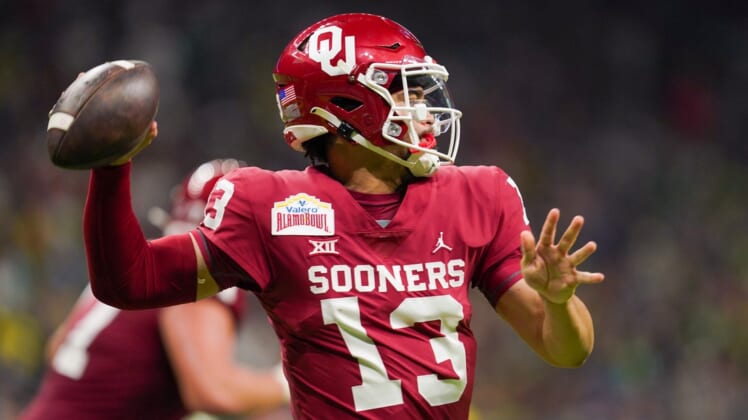 Oklahoma phenom freshman quarterback Caleb Williams announced his intention to enter the transfer portal Monday but allowed for a possible return to Norman.

Williams threw for 1,912 yards with 21 touchdowns against four interceptions since taking over for Spencer Rattler six games into the 2021 season. Williams rushed for another 442 yards, scoring six touchdowns.

But Sooners head coach Lincoln Riley left for Southern California, while Brent Venables was hired to replace him. Former OU coach Bob Stoops coached the Sooners in their bowl game victory over Oregon.

“I came to Oklahoma with a game plan, but with all of the recent changes, I need to figure out what is the right path for me moving forward,” Williams posted, in part, to Twitter. “… The only way I can speak with other schools and see who may offer the best preparation and development for my career is by entering the portal. Staying at OU will definitely be an option as I begin this process.”

Williams is coming off a three-touchdown performance in Oklahoma’s 47-32 win over the Ducks in the Alamo Bowl. The Sooners finished 11-2.

“While we believe OU provides Caleb the best opportunity to develop as a player and realize his goals for college and beyond, we respect his right to explore his options following key staffing changes here,” the statement read, in part.

Carl Williams, Caleb’s father, told Yahoo Sports that Caleb Williams “doesn’t have a destination” picked out and that his path to becoming an NFL quarterback is the most important factor.