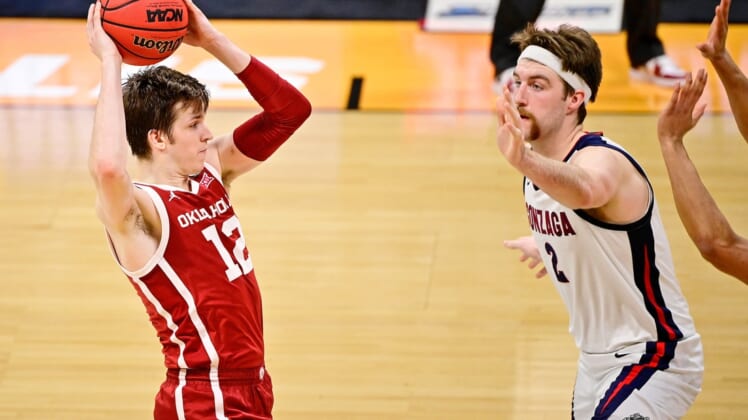 Oklahoma standout guard Austin Reaves is entering the NBA draft after a solid 2020-21 season, he told ESPN on Wednesday.

Reaves averaged 18.3 points, 5.5 rebounds and 4.6 assists this season while guiding the Sooners to the second round of the NCAA Tournament. He scored 27 points on 11-of-17 shooting in the season-ending 87-71 loss to unbeaten Gonzaga.

Read More: RECAP: Drew Timme scores 30 to lead No. 1 Gonzaga past No. 8 Oklahoma

“I have decided to declare for the NBA draft and will be hiring an agent in the near future,” Reaves told ESPN. “My family and I believe this is the best decision for my future and I’m super excited for the next part of my journey.”

The 6-foot-5 Reaves had the option to return for one more college season due to the NCAA “free year” policy related to the coronavirus pandemic.

Instead, he will focus on improving his draft stock. Currently, he is forecasted as a second-round pick but the performance against Gonzaga may make him more coveted.

“I think NBA teams were able to see how I can be a factor on a winning team, how I can get my teammates and myself going to try to win as many games as possible,” Reaves said. “Playing point guard was/is where I am comfortable. It is where I grew up playing the game since age 5. I always have liked being the guy getting the play set up, putting guys in the right position, and assisting to teammates.”

Reaves spent his first two college seasons at Wichita State and averaged 6.1 points in 66 games (11 starts) before transferring to Oklahoma. He sat out the 2018-19 season due to transfer regulations before averaging 16.3 points, 5.4 rebounds and 3.7 assists in 56 games (all starts) in two seasons for the Sooners.