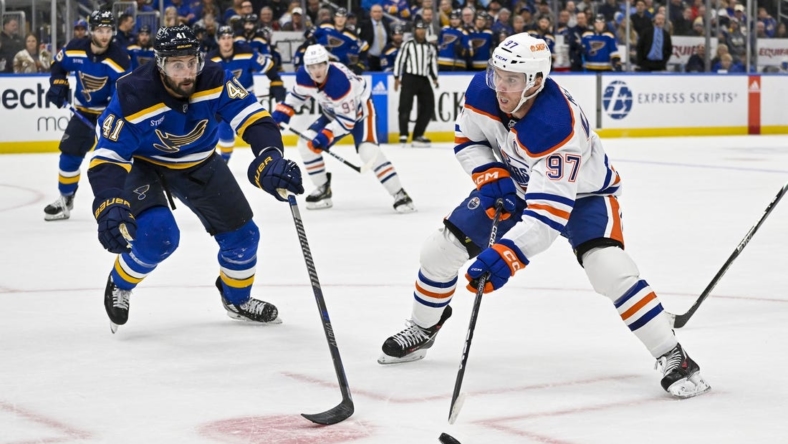 Jesse Puljujarvi and Zach Hyman also scored for the Oilers, who their second straight game, and Stuart Skinner made 37 saves.

The Blues defeated the Oilers 2-0 in Edmonton four days earlier by playing stifling team defense. But this time Edmonton’s transition game quickly got into high gear.

Warren Foegele burst in on left wing, circled the net and passed back to Darnell Nurse — whose shot from the high slot was deflected past Binnington by Puljujarvi.

St. Louis stepped up its offensive pressure in the second period while outshooting the Oilers 20-6. The Blues generated multiple chances, including O’Reilly’s shot from the slot and Torey Krug’s slap shot from the top of the right faceoff circle.

The Blues tied the with a power-play goal with 4.4 seconds left in the period. Brayden Schenn fired a shot from atop the right circle, Justin Faulk deflected it on goal and O’Reilly bumped in the rebound.

Binnington kept the game tied with excellent saves in third period, including one on Hyman’s point-blank shot less than two minutes into the third period and another on Nugent-Hopkins off a 2-on-1 break.

Skinner kept the game tied at 1-1 by with a great save on Ivan Barbashev on the doorstep.

Nugent-Hopkins scored the winning goal off a cross-crease pass from Connor McDavid with 6:16 left in the third. Hyman made it 3-1 with an empty-net goal with 27 seconds to play.