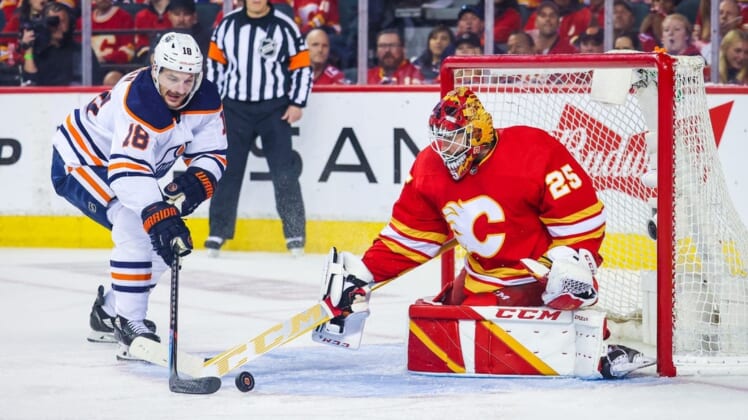 Connor McDavid’s goal 5:03 into overtime gave the visiting Edmonton Oilers a 5-4 victory over the Calgary Flames on Thursday and sends them to the Western Conference final.

In overtime, McDavid took a feed from Draisaitl in the slot and ripped a shot off the post and in for his seventh goal of the playoffs.

The tally gave McDavid his only point of the night.

“I was bad all night,” the Edmonton captain said. “I was riding the coattails of my teammates and got a great opportunity and so I’m happy to contribute.”

The Oilers, who are headed to the first conference finals for the first time since 2006, will face the winner of the Avalanche-Blues series. Colorado leads St. Louis 3-2 entering Game 6 on Friday in Missouri.

McDavid said of getting to the West finals, “It means everything to me and this group. We’ve been through a lot of ups and downs, and this is one of the ups.”

The finish capped yet another crazy clash. Just like the first two games in Calgary, the hosts blew a 2-0 lead — though the Flames did recover to win Game 1.

Mangiapane’s third goal of the playoffs opened the scoring just past the midway point of the first period, and Backlund’s deflection tally doubled the lead 5:41 into the second period, his fifth of the playoffs.

Hyman’s power-play goal put the Oilers ahead with 5:03 left in the second period, giving him a goal in five straight games. The tally started a wild outburst.

Gaudreau replied 15 seconds later, his third of the playoffs. Jarnkrok put Calgary ahead 4-3 when he buried a shot 16 seconds after that — his first goal since being acquired at the trade deadline.

However, Bouchard tied the score 40 seconds later with his third of the playoffs. The 71-second spree set a league record for the fastest four goals in a NHL playoff game.

For the Flames, the loss was controversial. Coleman appeared to score a go-ahead goal late in regulation, but upon review, it was ruled he kicked in the puck.