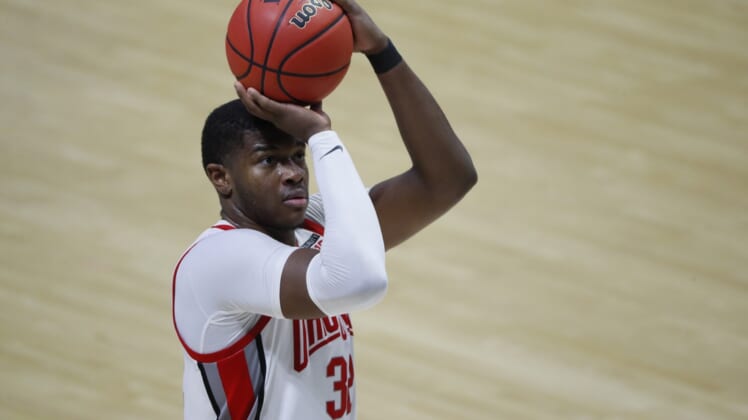 Ohio State has alerted police to threatening messages received by star forward E.J. Liddell after Friday’s stunning overtime loss to Oral Roberts in the first round of the NCAA Tournament, according to ESPN.

Liddell scored 23 points in the loss but missed a free throw with 35 seconds left in regulation that would have put the Buckeyes up by three. He shared direct messages he said he received after the 75-72 loss to the 15th-seeded Golden Eagles.

“What did I do to deserve this? I’m human,” asked Liddell in a tweet that shared the obscenity- and slur-laced messages, which included direct threats and wishes for Liddell’s death.

“These comments, while not from or representative of Ohio State fans, are vile, dangerous and reflect the worst of humanity,” Holtmann said in a statement he posted to Twitter. “EJ is an outstanding young man who had a tremendous sophomore season and he was instrumental in our team’s success. We will take the necessary actions to address this immediately.”

“The threatening social media attack E.J. Liddell faced after the game yesterday is appalling and will not be tolerated,” Smith tweeted. “To the few of you who have chosen to inappropriately rail against our players on social media, stop. Hate and derision have no place in Buckeye Nation or in civil society. If you cross the line and threaten our players, you will be hearing from the authorities. That I promise you.”

Oral Roberts was the first No. 15 seed to win in the tournament since 2016 (Middle Tennessee over Michigan State). It was the first NCAA Tournament win for the program since 1974.