Oakland Athletics right-hander Trevor Rosenthal will undergo season-ending surgery to repair a torn labrum in his right hip next Tuesday.

Athletics manager Bob Melvin told reporters on Wednesday, “He had some hip pain the last maybe week, week and a half or so. Unfortunately, after the shoulder surgery and working his way back and starting to throw, another thing popped up and he’s going to have hip surgery. So we will not see him this year.”

Rosenthal signed a one-year, $11 million contract with the Athletics in the offseason. Oakland was hoping he would be its closer.

Recovering from the April operation, he resumed baseball activities on June 22 before having to stop due to the hip ailment.

While Rosenthal’s loss is certainly a setback, Melvin also sees it as one that can be downplayed.

“We weren’t 100 percent sure we were going to get him back anyway,” Melvin said of Rosenthal. “We were hopeful, and based on the way he was progressing after the surgery, we felt pretty good about (a return) sometime in mid to late August. But that’s just not the case now.”

However, his career plunged downward before he revived it last season with a 1.90 ERA and 11 saves in 23 games while splitting the campaign with the Kansas City Royals (seven saves) and San Diego Padres (four).

Now Rosenthal’s tenure with Oakland likely will end without him ever throwing a pitch for the team.

“It stings,” Melvin said. “This was the final piece we brought in. When some money was freed up to be able to bring in a guy like him and you expect them to be your closer, it’s disappointing.

“It’s disappointing for him, too. He wanted to pitch for us and then when he had his shoulder surgery, he worked hard to try to come back and help us out.” 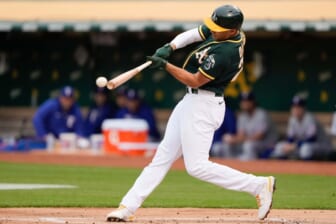 In other Athletics injury news, third baseman Matt Chapman wasn’t in the starting lineup Wednesday after spending time in a Houston-area hospital due to the stomach flu, according to Melvin.

“He woke up with it this morning, pretty dehydrated, actually went to the hospital for a little bit, got an IV,” Melvin said. “So it’s not just a normal illness. It’s something that sapped him pretty good, so definitely won’t see him tonight.”

Melvin said Chapman was released from the hospital on Wednesday afternoon.