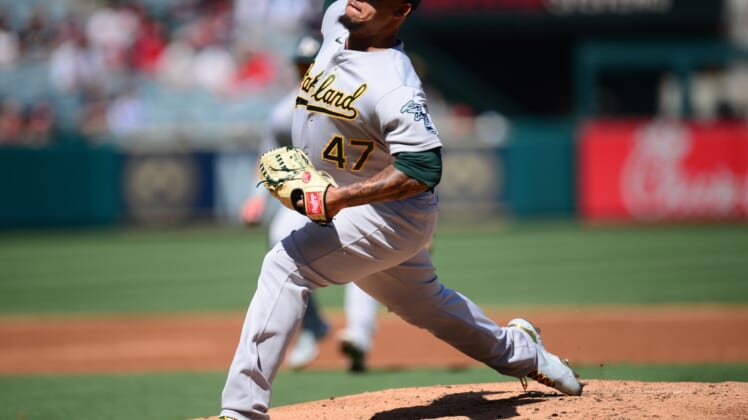 Jed Lowrie’s sacrifice fly in the top of the 10th inning lifted the Oakland A’s to a 3-2 victory over the Los Angeles Angels Sunday afternoon in Anaheim, Calif., completing a three-game sweep.

With the victory, Oakland (82-67) remained two games behind Toronto for the second wild card spot in the American League.

For most of the afternoon, the game was a pitchers duel between A’s starter Frankie Montas and Angels starter Shohei Ohtani. Montas threw seven scoreless innings, allowing just one hit, while Ohtani lasted eight innings, giving up solo homers to Yan Gomes and Matt Chapman and striking out 10.

Ohtani finished strong, striking out Chapman with the bases loaded to end the eighth inning.

Montas left the game after seven innings with a 2-0 lead, and reliever Jake Diekman threw a 1-2-3 eighth. Sergio Romo got the ball for the A’s in the ninth but couldn’t hold the lead.

Phil Gosselin led off with double and Jared Walsh followed with an infield single. One out later, Jose Rojas singled to right field, scoring Gosselin. Walsh initially held up at third, but scored when right fielder Seth Brown’s throw home sailed over the head of the catcher Gomes for an error, allowing Walsh to score and tie the game at 2-2.

Montas gave up just one hit – a double to Brandon Marsh in the third inning. He walked four, including Ohtani twice, one which was intentional.

The A’s scored off Ohtani to take the lead in the third inning when Gomes led off with a home run after falling behind in the count 0-2. On a 1-2 pitch, Gomes hit an 85-mph slider over the fence in right-center for a 1-0 lead.

In the fourth inning, it was Chapman’s turn, hitting the first pitch he saw from Ohtani – a 95-mph fastball – over the fence in straight-away center field to a home run and 2-0 Oakland advantage.

Meanwhile, Montas made quick work of the Angels lineup. He retired the side in order in the second, fifth and sixth innings.