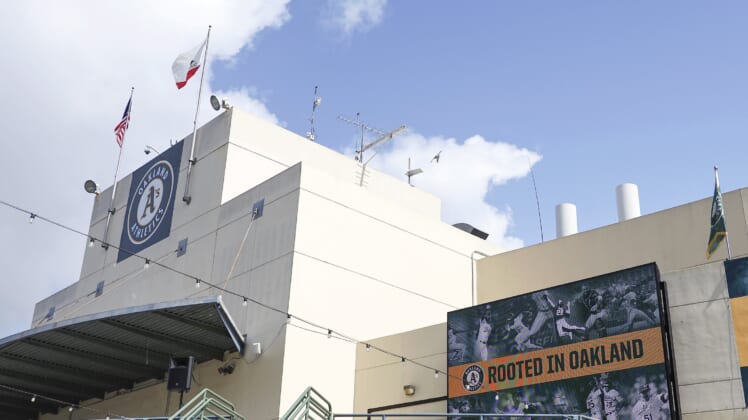 Mar 28, 2019; Oakland, CA, USA; View of the exterior of Oakland Coliseum before the game between the Oakland Athletics and the Los Angeles Angels. Mandatory Credit: Kelley L Cox-USA TODAY Sports

The Oakland Athletics’ plans for a new stadium may not come to fruition, which reportedly could force the franchise to relocate.

Because the public funding required to make that project a reality are thought to be rather high, there’s uncertainty as to the A’s future, because MLB has advised against Oakland rebuilding its current stadium of RingCentral Coliseum.

“The Oakland Coliseum site is not a viable option for the future vision of baseball. We have instructed the Athletics to begin to explore other markets while they continue to pursue a waterfront ballpark in Oakland,” said MLB in a statement, per Passan.

MLB commissioner Rob Manfred has floated potential expansion team cities before, naming Charlotte, Las Vegas, Montreal, Nashville, Portland and Vancouver as possibilities. Those are among the destinations the Athletics could be looking at.

It’s a tough situation for the A’s to begin with, because they’re one of the smallest-market teams in baseball, and their payroll ranks 23rd out of 30 clubs, which is actually high compared to where they’ve been in years past.

With the lease on the Coliseum running through 2024, there’s still time for Oakland to either sort out the proposed Howard Terminal waterfront project, or to seek out another alternative.

However, as the lease’s expiration draws nearer, with the push to explore relocation options also cutting into organizational resources, it’s an uphill battle for the A’s all the way to stay in Oakland.