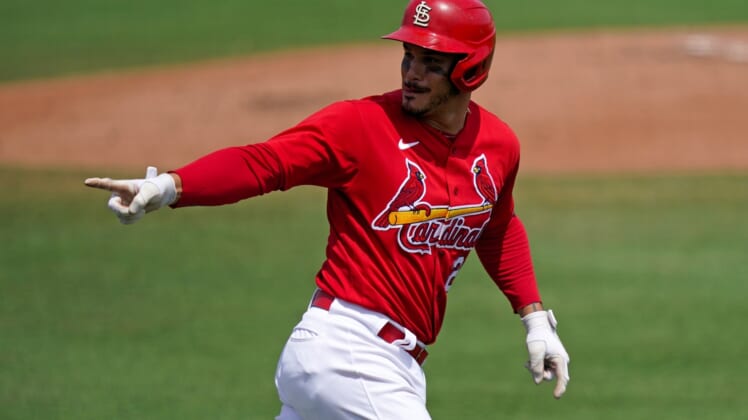 The St. Louis Cardinals hope adding one of baseball’s best offensive performers will send them to the top of the NL Central.

The quest for these division foes begins Thursday with a matchup in Cincinnati.

Both St. Louis and Cincinnati benefited from the expanded postseason format due to the abbreviated 2020 campaign.

Looking to boost some of those offensive numbers, the Cardinals acquired five-time All-Star third baseman Nolan Arenado from Colorado. Though Arenado endured a subpar 2020 with eight homers and a .253 average in 48 games, he’s clubbed 235 career home runs and makes St. Louis the apparent favorite in the Central.

“I made this decision based on hopefully going to a competitive team, a team that has great tradition,” Arenado, who claims he’s healed from last season’s shoulder issue, told MLB.com. “And, I believe St. Louis has that.

“I feel like I’m in a better place now. … I expect to be back to normal and being back to who I am.”

Arenado, a lifetime .318 hitter with 12 homers in 43 games versus Cincinnati, should benefit from playing alongside fellow star Paul Goldschmidt. The veteran first baseman hit .304 last season, and prior to 2020, hit at least 33 homers in three straight seasons.

Goldschmidt is 3-for-20 with eight strikeouts against projected Cincinnati starter Luis Castillo. However, two of those hits were home runs.

With 2020 NL Cy Young Award winner Trevor Bauer now with the Los Angeles Dodgers and Sonny Gray dealing with back spasms, Castillo gets Cincinnati’s Opening Day start. The 28-year-old right-hander and 2019 All-Star went 4-6 with a 3.21 ERA and struck out 89 in 12 starts last season. He allowed a run and two hits during a complete-game, 3-1 win on Sept. 11 in his only start against the Cardinals last season.

“He’s just a young pitcher, still, that continues to get better and better in so many ways,” said Reds manager David Bell, who is mourning the recent death of brother, Mike, from cancer.

“He competes as well as anyone, any pitcher that I’ve been around.”

The Reds look for some offensive consistency with essentially the same cast of characters from 2020. Third baseman Eugenio Suarez hit .202 but belted a team-high 15 homers last season. Nick Castellanos returns after hitting 14 homers in his first season in Cincinnati, while Jesse Winker homered 12 times and batted .255 — best among everyday Reds players.

Winker and Suarez are a combined 7-for-23 with three homers versus projected Cardinals starter Jack Flaherty. Teammate Joey Votto is 5-for-10 against the right-hander, but his Opening Day status is uncertain due to a recent bout with COVID-19.