No place like home for Boston College as Albany game looms

Boston College (6-4) should be glad to be back in Chestnut Hill, Mass., Monday night to face Albany (2-7) in a nonconference game.

Yes, the Eagles are coming off a 79-68 loss at Saint Louis. But now new coach Earl Grant’s team has returned home, where the Eagles are a perfect 6-0 with an average winning margin of 16.3 points.

Grant indicated the Eagles were uncomfortable during a first half in which they were outscored 36-19 by Saint Louis.

“We were away from our arena,” Grant said. “(There was) a lot of noise, a big crowd, and we settled for some of those (outside) shots. We wanted to go inside. I thought we took too many threes in the first half with 14 of 15 seconds left on the clock. We need to be more disciplined and look for a better shot.”

Grant added that the Eagles “shared the ball” better in the second half, when they shot 53.1 percent from the floor, as opposed to 29.6 percent in the first half. 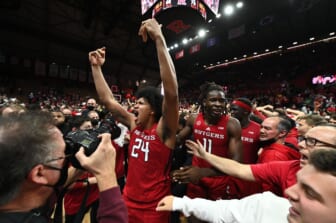 Albany has lost its previous five road games by an average of 17.6 points under first-year coach Dwayne Killings. The Great Danes are coming in on a positive note, having defeated Columbia 60-59 on Saturday night on two free throws by De’Vondre Perry with three seconds left.

But Albany took a strange path to get there. The Great Danes scored the first 12 points of the game and led by 21 at one point in the first half before eventually squandering that entire lead and needing the clutch foul shots of leading scorer Perry (12.1 points) to erase a one-point deficit.

“We found a way to close it out,” Killings said. “I’m really proud of our guys. I thought we spent the last two or three days really working on our offense, and it clicked in the first half. I think after that we got tight, and it showed a bit.”

BC likely will try to get the ball inside to 7-foot Quinten Post (8.7 points) and 6-foot-9 James Karnik (7.9 points) against undersized Albany.