No guarantees in late innings when Dodgers, Reds meet 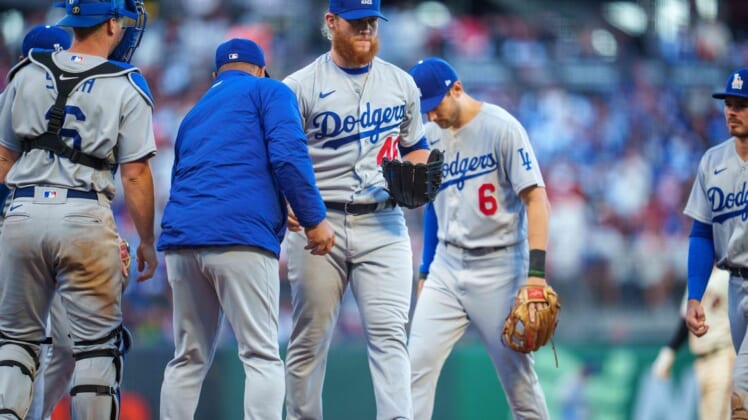 Two teams with bullpen issues meet when the visiting Los Angeles Dodgers open a three-game series with the Cincinnati Reds on Tuesday night.

The Dodgers enter the series in first place in the National League West despite losing two of three at home over the weekend to the Cleveland Guardians and five of eight overall. The Reds were just swept by the division rival Milwaukee Brewers and have dropped eight of 11.

Dodgers closer Craig Kimbrel, acquired in April to account for the free-agent loss of Kenley Jansen to the Atlanta Braves, has struggled while posting a 7.00 ERA over his last nine appearances, including two runs in the ninth inning to absorb the loss Sunday.

“I think we’re a ways from that point,” Roberts said of a change away from Kimbrel, who has 12 saves in 13 chances. “Obviously, we’ve used Hudson, Phillips and Graterol in different roles. But as far as specifically the closer, Craig is our closer.”

The two runs Sunday raised Kimbrel’s ERA to 4.71, while dropping his record to 0-3.

The Reds’ bullpen issues aren’t limited to one pitcher. The group is ranked last in baseball with a 5.06 ERA and second to last in walks allowed (127). One of the few bright spots had been Alexis Díaz, with a 2.40 ERA in 30 innings.

“It’s something that we’ve been dealing with the whole season,” Reds manager David Bell said. “We take great interest in keeping our guys healthy, so it’s disappointing. The positive side of this is that Díaz is going to be back.

“I’m very hopeful that he’ll be back 12 days from now when he can be. It’s not a bad little reset for him. He’s got some tendinitis in there.”

The Dodgers send their top-performing starter to the mound in right-hander Tony Gonsolin (8-0, 1.42 ERA) in the opener of a nine-game, three-city road trip. Gonsolin, making his 13th start, leads the major leagues in ERA and is tied with teammate Tyler Anderson for most wins in the National League.

Gonsolin has two appearances (one start) against the Reds with a 4.26 ERA over 6 1/3 innings. The start came April 15 at home when he went four scoreless outings in his second outing of the season.

The Reds counter with Los Angeles-area native Tyler Mahle (2-5, 4.46). In his most recent start last Tuesday at Arizona, the right-hander became the first major league pitcher since 1900 to fail to earn a win after throwing at least nine scoreless innings on the road with no walks and at least 12 strikeouts, according to the Reds. Cincinnati won 5-3 in 12 innings.

He also became the first Reds pitcher to throw at least nine scoreless innings without earning a win since LHP Travis Wood in an 11-inning, 1-0 loss on July 10, 2010, at Philadelphia.

In his last seven starts since May 13, Mahle has a 3.07 ERA, lowering his season ERA from 6.46. That stretch also includes all six of his quality starts. In his last four starts, Mahle is 0-0 with a 1.30 ERA but in each game, the Reds’ bullpen squandered late leads.

For the first time in his career, Mahle has four consecutive quality starts and owns the longest quality starts streak by a Reds pitcher this season.