No. 7 USC, Oregon State clash in battle of unbeatens 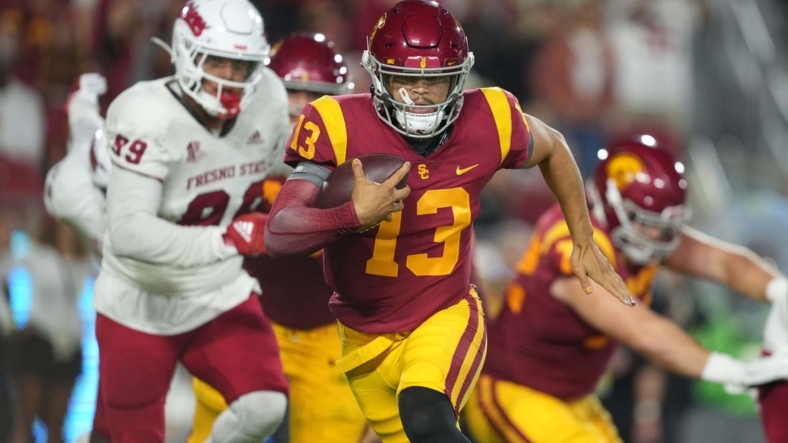 Seventh-ranked USC heads to Corvallis, Ore., on Saturday for a meeting with undefeated and upset-minded Oregon State in Pac-12 Conference play.

The Trojans (3-0, 1-0 Pac-12) last week rolled past Fresno State, a mutual opponent shared with Oregon State (3-0) this season, 45-17. USC balanced its passing attack, which has been prolific on the arm of quarterback Caleb Williams, with an effective ground game.

Running backs Austin Jones and Travis Dye each rushed for more than nine yards per carry en route to 110 and 102 yards, respectively. Their combined efforts marked the first time USC had two 100-plus-yard rushers in the same game since November 2018 – when Aca’Cedric Ware (205 yards) and Vavae Malepeai (101) starred in the Trojans’ last visit to Oregon State’s Reser Stadium.

The 38-21 USC win in 2018 came against a much different Beavers team in the program’s first year under coach Jonathan Smith. Since then, Oregon State snapped its eight-year bowl-game drought last season, is current off to its best start since 2014, and last September, ended a pair of losing streaks against the Trojans.

The 45-27 Beavers romp stopped a skid of four straight losses to USC and marked their first win at the Los Angeles Memorial Coliseum since 1960. That night was a breakout performance for Oregon State combo linebacker-running back Jack Colletto, who rushed for a pair of touchdowns out of goal-line Wildcat sets.

“They do a very good job with their personnel groupings,” first-year USC coach Lincoln Riley said. “They’re very creative with the personnel they use. They’ve certainly got a system they believe in and style of offense they believe in.”

Colletto remains a weapon in the Beavers offense this season, most notably scoring out of the same set on the final play of Oregon State’s 35-32 win Week 2 at Fresno State. However, expect plenty of entirely changed looks between Oregon State and USC this time around.

“The quarterback (Williams) can be accurate, move his feet,” Smith said. “The receiver play [is] dangerous, bunch of different weapons. Got a couple good backs. So this is the best offense we’ve played so far.”

Each of those position groups contributing to USC’s 50.7-point per game output (6th in FBS) feature prominent transfer talent: Caleb Williams and receiver Mario Williams from Oklahoma, reigning Biletnikoff Award-winning receiver Jordan Addison out of Pitt, Jones and Dye coming into the backfield from Stanford and Oregon.

The influx of new skill-position talent has USC in pursuit of its first 4-0 start since 2017, as well as its dominance in the turnover battle. The Trojans have 10 takeaways with no turnovers, the best margin in the nation.

USC aims to continue its clean offensive play with “a big plus,” on the line according to Riley. Left tackle Courtland Ford returned to practice Tuesday from an injury sustained Week 2 at Stanford.

However, the Trojans lost wide receiver Gary Bryant Jr., who Riley revealed plans to redshirt this season. Oregon State, whose offense ranks 13th in FBS with 45.7 points per game, will be without tight end Luke Musgrave, Smith told reporters.