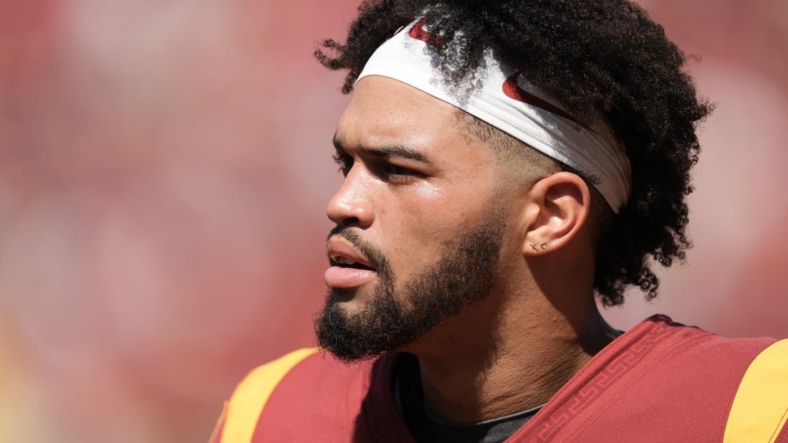 The Trojans (2-0) continued to dazzle offensively early into first-year head coach Lincoln Riley’s tenure last week at Stanford — at least, in the first half.

USC scored five first-half touchdowns of the Pac-12 Conference opener but managed a pair of field goals in the second half against the Cardinal. It marked the second time in as many games that the Trojans did not have to punt until the fourth quarter of a blowout win.

Quarterback Caleb Williams went 20-for-27 for 341 yards with four more touchdown passes, giving him six for the season to go with the team’s five rushing touchdowns and three field goals. His performance earned Davey O’Brien National Quarterback of the Week.

Jordan Addison has four of those touchdown receptions among his 12 catches for an average of 113.0 yards a game.

The Trojans offense cooled off, however, and Stanford pushed around the USC defense for 221 yards on a 441-yard day of total offense. Yet, the SC defense stiffened in the red zone, forcing two turnovers inside the 3-yard line.

“The positives, I think, are pretty obvious on all sides,” Riley said Tuesday. “The errors where we’ve got to get better: Too many mental mistakes. Whether it’s a lack of focus, or a lack of complete trust in what we’re doing, that’s got to grow.

“And the reality is, I’ve had players (who) have been in our systems for multiple years and it’s still not 100 percent trust,” Riley added.

Fresno State (1-1) is no stranger to facing USC and higher-profile teams. The Bulldogs are 1-4 all-time against USC, but last season beat then-No. 13 UCLA (40-37), lost to then-No. 11 Oregon by a touchdown (31-24), and have won four of their past five games against ranked opponents.

This is Fresno State’s first visit to USC since 2019 when the Bulldogs lost the season opener to the Trojans, 31-23.

That season marked the end of Jeff Tedford’s first tenure as Fresno State head coach. Heart procedures prompted him to step down and after a year off he served last season as a consultant to coach Kalen DeBoer. When Washington hired DeBoer, Tedford returned to his old office as head coach of his alma mater.

The veteran Tedford led Cal when it forged a rivalry with USC in the mid-2000s, and then produced seasons of 10 and 12 wins (2017 and 2018) at Fresno State. Tedford’s reputation is well established on the West Coast, even for a regional newcomer such as Riley.

The Bulldogs opened 2022 with a rout of Cal Poly, 35-7, and last week lost a heartbreaker to Oregon State on the final play. On a night Fresno State’s Jake Haener passed for 360 yards and Jordan Mims rushed for 122 yards with two touchdowns, the Beavers scored from the 2-yard line as time expired for a 35-32 OSU victory.

With Haener leading one offense — coming off a breakout 2021 in which he passed for almost 4,100 yards with 33 touchdowns — and Caleb Williams captaining the other, the quarterbacks promise to occupy the spotlight on Saturday.

“The quarterback is really good at getting (the USC wide receivers) the football,” Tedford said of Williams. “He’s very poised. He can beat you with his legs, as well, when he pulls it down.”

Tedford praised Williams, Addison, and USC running back Travis Dye — all of whom Riley convinced to join him during the offseason.

“It’s a tough place to play,” Tedford said of the Coliseum. “It’ll be a great environment for our kids to go into, against a great football team.”