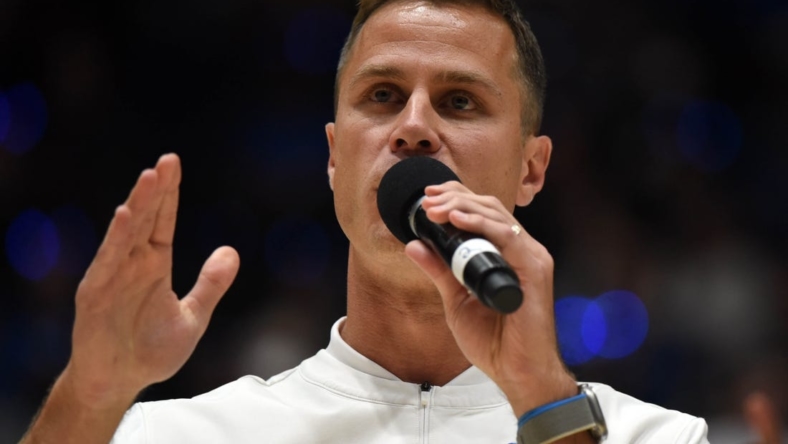 The No. 7 Blue Devils open a new era with Jon Scheyer as the head coach following the retirement of Hall of Famer Mike Krzyzewski. The first game for the Scheyer-led team comes Monday night against visiting Jacksonville in Durham, N.C.

Scheyer has been groomed to replace Division I’s winningest coach for a couple of seasons and particularly since June 2021, when Duke formally designated Scheyer as the coach-in-waiting. He was a guard on Duke’s 2010 national championship team.

But this is going to be different in Cameron Indoor Stadium.

“We’re really getting a feel for each other, and we have a lot of work to do,” Scheyer said of his first team.

“I think our group is hungry,” Scheyer said. “They’ve been on a mission. Really, at this point of the year, you’re trying to develop habits, trying to develop the mindsets you need to have every single day to have a successful winning team. And we’re not there yet, of course, but we’re on our way there.”

Whitehead has been recovering from August foot surgery. Roach is the lone Duke captain.

“I know my coaches and my teammates have the utmost confidence in me, but I’m not doing it alone,” Roach said.

Scheyer was in charge on the bench a few times in previous years when Krzyzewski was out with illness. But now it’s his team.

Jacksonville wants to be more than the answer to a trivia question regarding Scheyer’s first game in this capacity. The Dolphins know they’ll face a highly touted bunch of players as well.

“I know our guys have seen (through social media) firsthand what we’re about to play against,” second-year Jacksonville coach Jordan Mincy said. “Our guys are excited about it.”

As a Kent State player, Mincy played at Duke when Scheyer was a player. Duke won the game. Jacksonville went 21-10 last season, and the Dolphins are eager to take another step.

“It’s a journey,” Mincy said. “It’s just another part of that journey.”

It will be important for Jacksonville to focus on what it needs to do and not get caught up in the hoopla surrounding the Duke team.

“We have to continue to push the culture,” Mincy said. “It’s win by committee, it’s not one individual guy. Trying to have more ‘we first’ days than ‘me first.’ ”

Jacksonville should be able to count on the toughness provided by guard Kevion Nolan, a returning All-Atlantic Sun Conference first team selection.

“We have to make sure now he doesn’t put too much pressure on himself and let the game come to him,” Mincy said.

The Dolphins expect to have more firepower in terms of perimeter shooting than a season ago, Mincy said.

This will be the first Jacksonville-Duke meeting. Former High Point coach Scott Cherry, an ex-North Carolina player, will be on the visiting side again at Duke as a Jacksonville assistant coach.