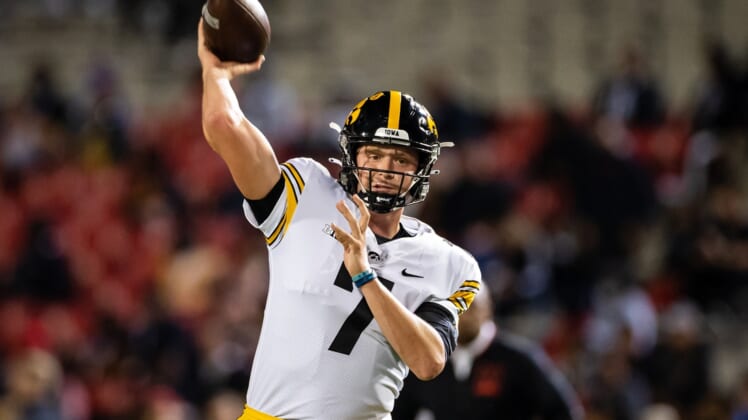 The No. 5 Iowa Hawkeyes scored 31 points in the second quarter and forced seven total turnovers to blow out previously undefeated Maryland 51-14 on Friday night in College Park, Md.

Spencer Petras went 21-for-30 passing for 259 yards and three touchdowns and added a pair of 1-yard touchdowns on quarterback sneaks for Iowa (5-0, 2-0 Big Ten).

Taulia Tagovailoa, who entered the night as the Big Ten’s leading passer in both yards and accuracy, mustered just 157 yards and threw five interceptions against two touchdowns for Maryland (4-1, 1-1).

The Terrapins led 7-3 after one quarter thanks to an eight-play scoring drive, powered by two deep completions over the middle to Dontay Demus Jr. Tagovailoa rolled out to hit tight end Chigoziem Okonkwo for a 9-yard touchdown.

Iowa responded with a long drive that ended on the first play of the second quarter, Petras’ first rushing touchdown. But the game pivoted on the ensuing kick return, when Demus injured his right knee fighting through a tackle and lost a fumble in the process.

With the short field, Iowa scored on an 8-yard reception by Arland Bruce IV to make it 17-7. Tagovailoa’s very next pass was batted in the air by linebacker Jack Campbell and intercepted by Jack Koerner; Koerner fumbled on the return but Iowa retained possession. Soon Petras pushed across his second touchdown run.

Fullback Monte Pottebaum got in on the action on Iowa’s next drive, scoring from 2 yards out. Iowa was able to add a field goal in the final minute for a 34-7 lead at intermission.

The Hawkeyes piled on in the second half. Running back Tyler Goodson left defenders in the dust on a 67-yard touchdown reception. Goodson also led Iowa in rushing on the night with 66 yards.

The Terrapins pieced together another scoring drive that ended in a 7-yard Rakim Jarrett touchdown to make it 44-14. But the Hawkeyes struck right back, with Tyrone Tracy Jr. making a 7-yard TD catch.

The Hawkeyes extended their winning streak to 11 games, dating to last year.