No. 4 TCU rallies for last-second win over Baylor 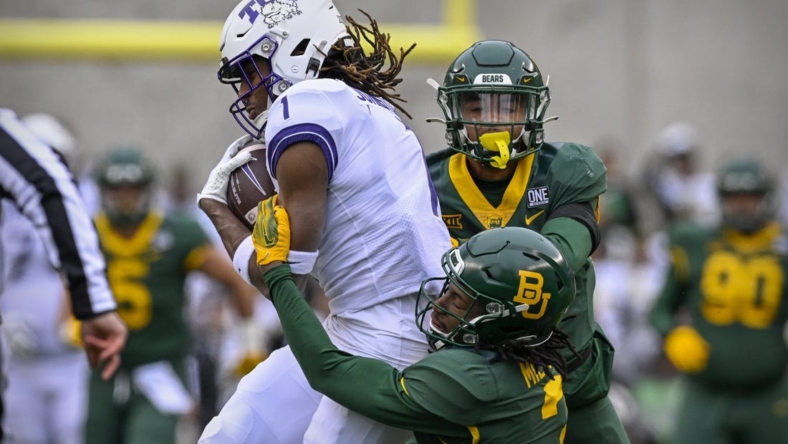 Behind an inspired effort from Max Duggan and a last-second field goal by Griffin Kell, No. 4 TCU kept its College Football Playoff hopes alive with a dramatic 29-28 comeback win Saturday against host Baylor in Waco, Texas.

Duggan passed for 327 yards and a touchdown and led the Horned Frogs (11-0) with 50 rushing yards and a score.

Kendre Miller and Emari Demercado also ran for touchdowns for TCU. Taye Barber caught five passes for 108 yards and Gunnar Henderson had a touchdown reception for the Frogs.

Craig Williams rushed 19 times for 112 yards for Baylor (6-5), which finished with 232 yards on the ground. Blake Shapen passed for 269 yards and a touchdown.

Baylor kicked off the scoring when tailback Qualan Jones found paydirt from 10 yards out on the game’s opening drive. The 11-play scoring march was aided by a fourth-and-1 run by Dillon Doyle.

TCU tied the game on its second possession on a Duggan 7-yard touchdown run. A 39-yard pass from Duggan to Quentin Johnston, which put the Horned Frogs in Baylor territory following a missed field goal, sparked the scoring drive.

The Bears took a 14-7 lead early in the second quarter when Johnson scored on a 2-yard run. But TCU responded with a five-play, 90-yard drive, which was capped by Miller’s 2-yard touchdown scamper.

Baylor threatened to take the lead before halftime, but Shapen was intercepted by Bud Clark in the end zone, which kept the game gridlocked at 14.

The Horned Frogs took a 20-14 lead with less than six minutes to go in the third quarter when Duggan hooked up with Henderson for a 26-yard touchdown pass. The extra point was no good

Reese’s 1-yard scoring plunge with less than 10 minutes remaining in the game put Baylor up 28-20. The score was set up by Baldwin’s 74-yard reception on third-and-11.