No. 25 San Diego State rested and ready for New Mexico

A fast start to the season has San Diego State in the Top 25 poll for the first time since November 2019.

The Aztecs (4-0, 0-0 Mountain West) aim to continue their winning ways on Saturday night when they play their conference opener against visiting New Mexico (2-3, 0-1) in Carson, Calif.

San Diego State may be rested after enjoying a bye week. Coach Brady Hoke made certain to put his team through the paces during the down time.

“(We needed) to keep working hard and hopefully correct some of the things we have not done as well during the bye week,” Hoke said.

On Sept. 25, the Aztecs recorded their fourth win in the first four games of the season for just the second time in 40 seasons with a 48-21 victory over Towson.

The Aztecs are averaging a robust 254.8 rushing yards per game, with all four of their contests eclipsing at least 200 yards on the ground.

Lobos defensive coordinator/linebackers coach Rocky Long, however, is well versed in all matters involving San Diego. He was its head coach before resigning in January 2020

“(Long) will probably bring out something different; he’ll switch some things up for us,” Byrd said. 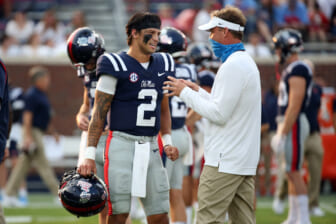 “The biggest improvement we have to make is hitting the intermediate and down the field shots while still keeping our strengths,” Aztecs offensive coordinator Jeff Hecklinski said. “We are looking for explosive plays all the time.”

New Mexico won its first two games but has been outscored 92-23 during its current three-game skid, including a 38-10 drubbing against Air Force on Saturday.

The Lobos mustered just one first down and ran 18 plays in the first half. They trailed 24-0 at halftime.

“Obviously, we’re not very good,” New Mexico coach Danny Gonzales said. “… And we’re not good enough on defense yet to be so bad on offense and not get first downs.”

Gonzales previously served on the Aztecs’ staff from 2011-17, including defensive coordinator in his final season.

Terry Wilson threw for 179 yards with one touchdown and one interception to pace New Mexico.