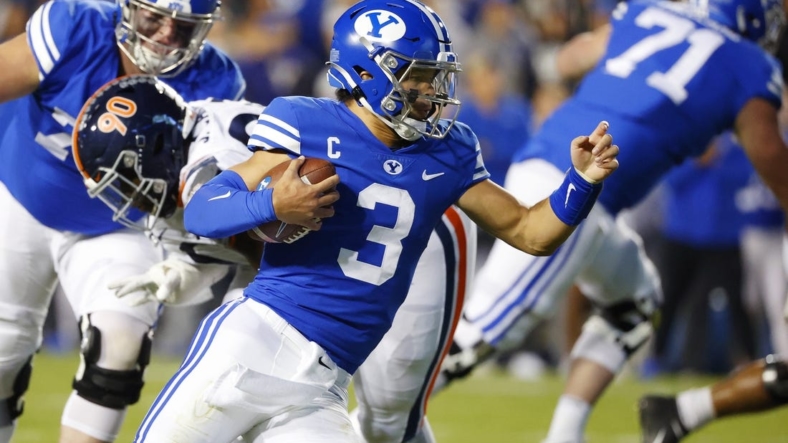 Opening a season on a winning note has become embedded in BYU’s DNA.

The No. 25 Cougars have plenty of reasons to feel optimistic when they travel to Tampa, Fla., to face South Florida in the season opener for both teams on Saturday.

BYU is 5-1 in season openers under head coach Kalani Sitake, with the loss coming against archrival Utah in 2019. The Cougars have won 13 of their last 15 season openers.

BYU quarterback Jaren Hall attributes a willingness to do homework for the program’s win-early tendencies.

“You have more time to study their scheme, plays, and watching film than for a normal game week,” Hall said. “The more you can burn all of that into your memory, then when you’re in the stadium, you can turn off your brain, stop thinking and go have fun. You can allow all your preparation to come out through your energy.”

Hall will be eager to show what he can do against the Bulls. The fifth-year junior was sidelined with a rib injury when the Cougars beat South Florida 35-27 last season to open the schedule with a 4-0 record.

Former BYU quarterback Baylor Romney filled in and threw for 305 yards with three touchdowns. Hall made his first career start when the two teams met at Tampa in 2019 – a 27-23 loss for BYU.

Figuring out how to contain Hall will be a dilemma for the Bulls. Hall had a 156.1 pass efficiency rating last season and posted four 300-yard games in 10 starts. He had 2,583 yards and 20 touchdowns through the air overall.

South Florida has defeated just one FBS opponent over the last two seasons, although the trend could change in a hurry in 2022.

The infusion of transfers with veteran contributors already has had a positive impact on team culture.

“I think my first two years, a lot of guys were trying to find a way off the field,” USF coach Jeff Scott said. “They were trying to find ways not to practice, not to take reps, and just wait until game day. That culture has shifted where guys are now out there pushing themselves and encouraging their teammates.”

BYU was preparing to face hot and humid conditions at Tampa on Saturday. Now there’s a chance the Cougars could be dealing with rain instead. The team is fully prepared to handle either scenario.

“We have had some practices already where it has been kinda wet and had a scrimmage that was kind of wet,” Sitake said. “I don’t know if we really need to flood the field or put the ball in a bucket of water. We just show up and play. They have to play in the same weather that we play in, too.”

BYU’s lone previous win in the state of Florida was a 49-23 triumph over UCF in the 2020 Boca Raton Bowl.