No. 23 BYU Cougars target another Pac-12 foe in No. 19 Arizona State Sun Devils 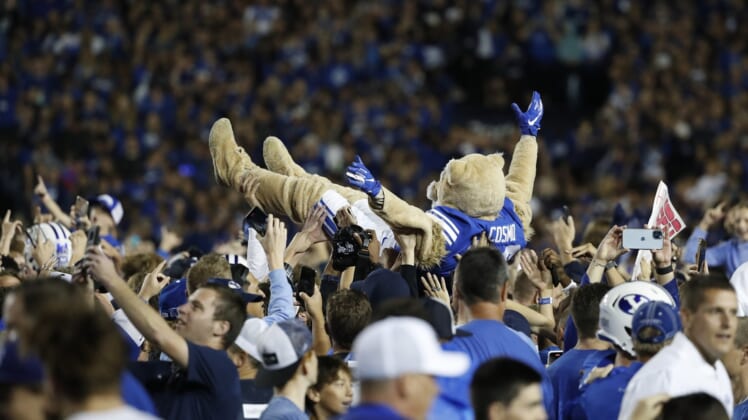 No. 19 Arizona State is preparing to play its first road game with fans in the stadium since 2019 when the Sun Devils travel to Provo, Utah, to face No. 23 BYU on Saturday.

COVID-19 protocol kept fans out of the stadium for the Sun Devils’ 2020 season that included four games against Pac-12 opponents.

Arizona State coach Herm Edwards knows of the challenge ahead facing the Cougars at LaVell Edwards Stadium in a higher altitude than Tempe, Ariz.

The Sun Devils (2-0) have routed Southern Utah and UNLV at home in their first two games, outscoring those teams by a combined 78-24.

“They’ve got a great fan base, and it’s going to be loud,” Edwards said of the BYU game. “You couldn’t go into a better venue when you think about college football. They have a great venue and they do a great job supporting their team.

“This is kind of what you want to experience as a football team. Kind of figure out what you are.”

What the Sun Devils have shown offensively to this point is a potent running game with versatile quarterback Jayden Daniels leading the team in rushing (165 yards on 19 carries) and passing (30 completions in 41 attempts for 307 yards with two touchdowns and an interception).

Arizona State is coming off rushing for 290 yards in the 37-10 win over UNLV with Daniels gaining 125 yards on 13 carries, Rachaad White amassing 90 yards on 22 rushes and two touchdowns, and Daniyel Ngata gaining 64 yards on six rushes with a score.

BYU (2-0) will look to win its first three games against Pac-12 opponents. The Independent power has already defeated Arizona 24-16 in Las Vegas and rival Utah 26-17 in Provo.

The Cougars are also trying to start consecutive seasons 3-0 for the first time since the 1951 and 1952 seasons.

BYU coach Kilani Sitake, 40-26 in his sixth season at his alma mater, said he believes the matchup with the Sun Devils will be the “most difficult” to this point in the season.

“They have tons of athletes and size and playmaking ability in a lot of different places,” Sitake said. “Jayden Daniels is a really, really good player. He has a lot of poise. He just seems like a veteran right now, and he is surrounded by a physical, athletic offensive line, good tight ends that can block and catch, and a number of skill players at running back and receiver that have tons of athleticism and speed.”

Edwards is equally impressed with BYU quarterback Jaren Hall, who he describes as a “wow guy.”

Hall has completed 36 of 58 pass attempts for 347 yards with five touchdowns and no interceptions. He is a dual threat similar to Daniels, rushing for 128 yards on 13 carries.

His favorite target, Neil Pau’u, has 11 receptions for 145 yards with three touchdowns.

Tyler Allgeier is BYU’s featured back with 196 yards on 44 carries with a touchdowns.