No. 2 Georgia promises no letdown vs. Samford 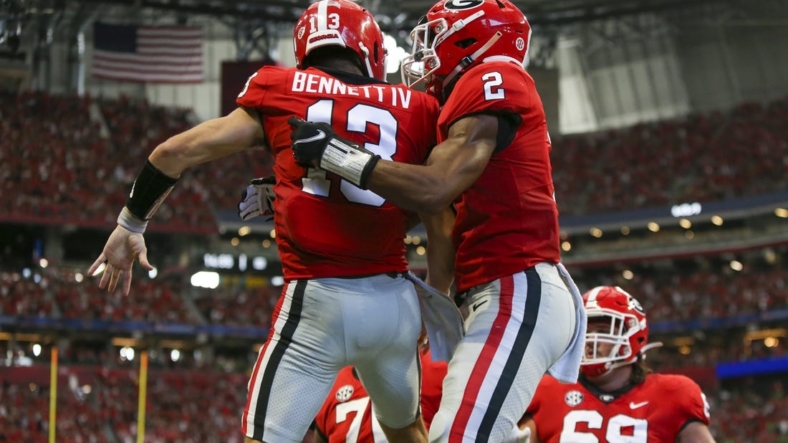 No. 2 Georgia will look to continue the momentum from its most dominating big-game performance in school history when it welcomes Football Championship Subdivision member Samford to Athens, Ga., on Saturday.

Georgia rolled to a season-opening 49-3 victory over then-No. 11 Oregon at Atlanta last week as it posted its largest margin of victory over an AP-ranked team in school history.

But that doesn’t mean the Bulldogs are taking Samford (1-0) lightly, even if their opponent this week needed 13 points in the final quarter to pull out a 27-17 win over visiting Kennesaw State.

“I’m focused on us. That’s going to be critical, how mature our team is,” Georgia coach Kirby Smart said. “Standards don’t need motivation.”

One player Smart won’t worry much about is quarterback Stetson Bennett. The sixth-year senior went 25 of 31 (80.6 percent) for a career-high 368 yards and two touchdowns, with no interceptions. The effort came in just 2 1/2 quarters before Carson Beck was called in for mop-up duty.

In his past three games against some of the best teams in college football — the College Football Playoff championship game against Alabama, the Orange Bowl against Big Ten champion Michigan, and Saturday’s game against Oregon — Bennett went 62 of 87 (71.3 percent) for 905 yards with seven touchdowns and no interceptions.

“You take what the defense gives you, right?” Smart said. “If they’re willing to give you a chance to make those plays and throw the ball around, we think Stetson does it well.”

Kendall Milton also had eight carries for 50 yards and a score, while McIntosh added a 1-yard touchdown run as the Bulldogs ran for 132 yards and four touchdowns on 25 carries.

“Scoring points is the name of the game,” Smart said before turning his response into a recruiting pitch.

“We want people that want to come play in this offense, and I think when you watch what they did today, if you’re watching from home, you’re saying, ‘Man, I’d love to play in that offense.’ ”

Georgia’s defense, which had five players taken in the first round of the 2022 NFL Draft, was just as effective as its offense against Oregon.

Ducks quarterback Bo Nix went 21-of-37 passing for 173 yards with two interceptions that were each thrown deep in Georgia territory. The Ducks rushed for 144 yards on 31 carries. Georgia, however, finished with no sacks.

Against Kennesaw State, Samford trailed 17-14 before quarterback Michael Hiers threw a 15-yard touchdown pass to Chandler Smith for a 20-17 lead with 12:40 left after Zach Williams had missed the extra point. Samford extended the lead when Hiers hit Smith for a 31-yard score with just over five minutes remaining.

Hiers completed 18 of 24 passes for 289 yards and four touchdowns, with his favorite target being Kendall Watson, who had nine receptions for a career-high 187 yards and two touchdowns.

“All around, we just kept playing and never panicked,” Samford coach Chris Hatcher said. “All in all, our guys just believed. It was just a complete team win over a really good football team, and we are excited to get this one under our belts.”