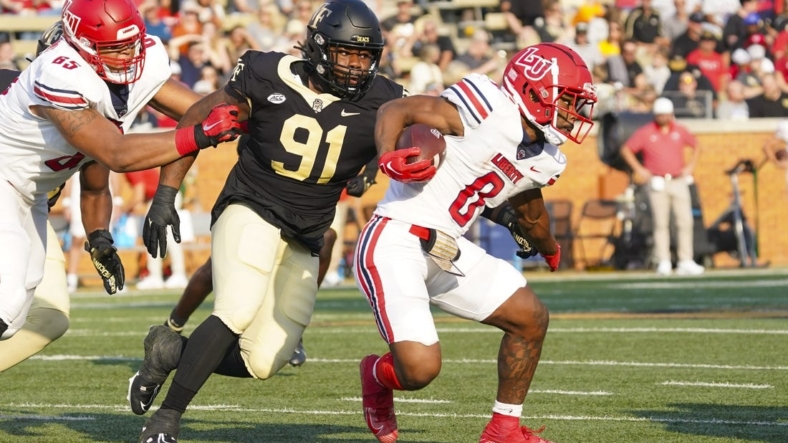 Wake Forest’s Justice Ellison scored on a 1-yard run with 3:39 remaining to break a tie and the No. 19 Demon Deacons still needed to stop visiting Liberty’s two-point conversion play to hold on for a 37-36 victory Saturday at Winston-Salem, N.C.

Liberty gambled after scoring with 1:11 left, but the decision backfired.

The Demon Deacons (3-0), who were playing on homecoming, survived to set up next week’s Atlantic Coast Conference showdown with visiting Clemson.

Kaidon Salter’s 18-yard pass to Demario Douglas on fourth-and-4 allowed Liberty to have a chance for a go-ahead play.

Hartman, who was making his season’s home debut after missing the opener because of a blood clot that required medical treatment in August, went 26-for-44 for 325 yards with two interceptions.

Salter finished 19-for-34 for 192 yards with two touchdown throws and two interceptions.

Salter scored on a 43-yard keeper on Liberty’s first possession of the second half, closing the gap to 20-15. The Flames (2-1) went ahead for the first time on Dae Dae Hunter’s 43-yard touchdown run just four plays into its next possession.

Wake Forest failed to convert a fourth-and-1 from its own territory on its next possession, but Nick Brown’s 53-yard field goal attempt missed for Liberty.

The Demon Deacons pulled even on Matthew Dennis’ 46-yard field goal with 12:39 to play.

Liberty fumbled on the ensuing possession, with Ryan Smenda’s return putting Wake Forest at the Flames’ 4-yard line. Hartman’s 3-yard toss to Banks in the back of the end zone gave the Demon Deacons the lead to complete a 10-point swing in less than 2 1/2 minutes.

Earlier, Wake Forest seemed in good shape, going up 20-5 after Hartman’s 8-yard touchdown toss to Blake Whitehart with 52 seconds to play before halftime.

Liberty countered with Brown’s 28-yard field goal on the last play of the half.

The Demon Deacons scored first on Dennis’ 33-yard field goal. Then Banks caught a 16-yard pass from Hartman to help push the lead to 10-0 early in the second quarter.

Liberty finally got on the board on Brown’s 47-yard field goal at the 10:55 mark of the second quarter. After Dennis booted a 27-yard field goal for a 13-3 advantage, Liberty blocked a Wake Forest punt and the ball rolled out of the end zone for a safety.