No. 19 Arkansas hosts No. 23 Cincinnati in first all-time meeting 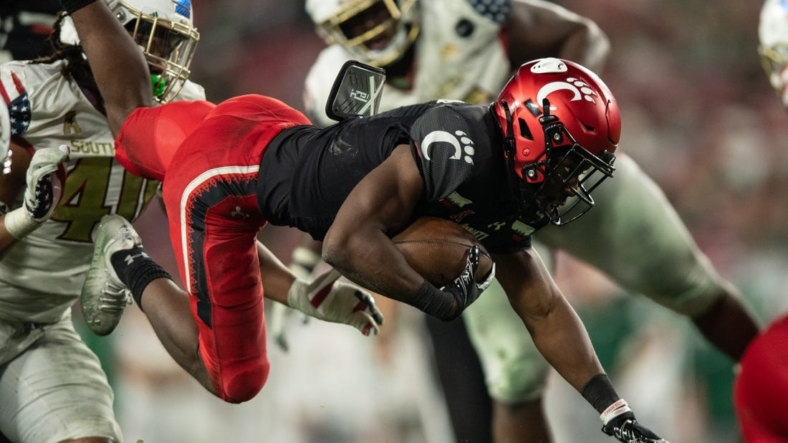 After becoming the first Group of Five program to reach the College Football Playoff, No. 23 Cincinnati suffered a series of losses in the offseason.

The Bearcats aren’t shying away from Power Five competition, though. They will travel to Fayetteville, Ark., to battle No. 19 Arkansas in both teams’ season opener Saturday.

Coach Luke Fickell is not likely to reveal whether redshirt senior Ben Bryant or redshirt sophomore Evan Prater will start under center against Arkansas.

“The way that we handle this (position) battle will really kind of shape the way the season goes,” Bryant said.

Arkansas coach Sam Pittman said he wouldn’t be surprised if Cincinnati played both quarterbacks on Saturday.

“They’re both good players,” Pittman said. “(Prater), obviously, may be a little more athletic than the other. But both of them can run and both of them can throw. We’ll prepare for both and be ready either way.”

Other key departures for Cincinnati included star cornerback Sauce Gardner, who went fourth overall to the New York Jets in the NFL draft, and leading rusher Jerome Ford. The backfield figures to remain a strength, as Charles McClelland, Myles Montgomery and LSU transfer Corey Kiner all could see carries.

“We haven’t had a true quarterback battle probably in a while,” Fickell told reporters at the start of fall camp. “But I think that more than anything, there’s a lot of other spots. I think quarterback, we’re gonna be in good shape. … The most difficult thing to not just replace, but figure out who it’s gonna be is the tailback. That’s one of those spots where I think we’ve really got to put some pressure on some of these guys to see what they can do and see what they can handle.”

The Razorbacks have designs on a big season of their own. Last year’s 9-4 record (4-4 SEC) was a clear improvement in Pittman’s second season. They even kept their visit to Alabama to a one-touchdown game, a 42-35 defeat.

KJ Jefferson will start at quarterback after leading the team in both passing and rushing last season. He completed 67.3 percent of his passes for 2,676 yards, 21 touchdowns and four interceptions while adding 664 rushing yards and six scores on the ground.

“In the previous years, Arkansas was always slept on, and we’re still dirt under a rug,” Jefferson told ESPN in early August. “This program has been on the rise, and we’re going to keep building and get back on top where Arkansas belongs.”

Cincinnati has beaten the likes of Notre Dame, Indiana and a ranked Army team over the past two years, but each of its past two seasons ended with losses to SEC opponents. The 2020 Bearcats lost to Georgia on a last-second field goal in the Peace Bowl, and last year they fell 27-6 to No. 1 seed Alabama in the CFP semifinal at the Cotton Bowl.

This will be the first meeting between Cincinnati and Arkansas.