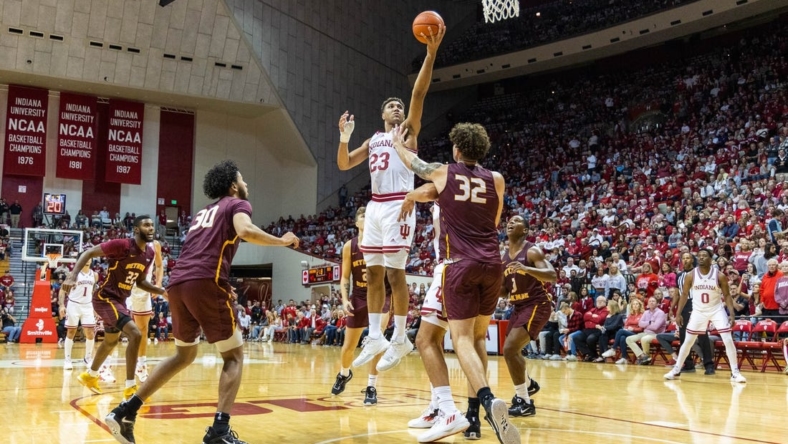 Trayce Jackson-Davis missed just one shot on his way to 21 points in a light workout for No. 13 Indiana, which breezed past Bethune-Cookman 101-49 on Thursday night in Bloomington, Ind.

Jackson-Davis went 9 of 10 from the field and was aided by wingman Miller Kopp, who made 4 of 7 from 3-point range to add 12 points for Indiana (2-0). Twelve players scored for the Hoosiers. Jalen Hood-Schifino kicked in eight points, eight assists and five rebounds for Indiana.

Pace favored the thoroughbred Hoosiers from the opening tip, and Indiana ended with 27 assists on 35 field goals.

Kopp and Jackson-Davis had nine points apiece at half and Indiana led 49-23.

For the second consecutive game to begin the season, the Hoosiers flexed depth and fresh legs to force turnovers (19 on Thursday) and surge into the second half.

Bethune-Cookman managed nine bench points to 51 for Indiana and trailed by 40 at the under-8 timeout in the second half.

By then, Hoosiers coach Mike Woodson made it apparent the rest of the game would belong to his reserves due to a 81-41 advantage.

A three-point play by Jackson-Davis and Kopp’s pull-up 3-pointer on a fastbreak opportunity blew the game wide open as part of an 11-0 run 2:30 into the second half.

Bethune-Cookman (0-2) was paced by Joe French with 11 points. Marcus Garrett had 10, while Zion Harmon was 2 of 11 from the field and scored six points for the Wildcats. Bethune-Cookman has one game left against Big Ten competition this season — Dec. 29 at Illinois — after losing to Iowa and Indiana to begin the season.

The Wildcats didn’t net a 3-pointer in the second half, and the comeback bid was further stunted by 14 team fouls in the final 20 minutes. Indiana was 21 of 22 from the line; Bethune-Cookman didn’t attempt a foul shot in the first half and finished 6 of 13.