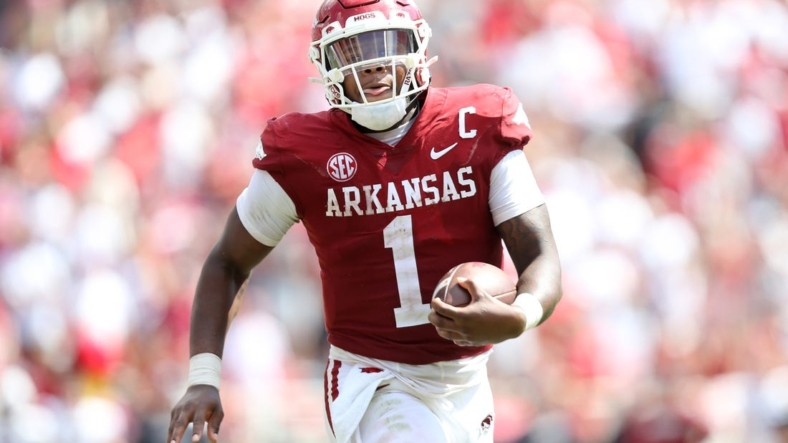 Arkansas moved into The Associated Press’ top 10 following its win over South Carolina last week. It’s the second consecutive season the Razorbacks have reached the top 10 — marking the first time that’s happened in a decade.

Arkansas (2-0) will look to build on its momentum Saturday night and establish deeper roots in the top 10 when it hosts Missouri State (2-0) in Fayetteville, Ark.

Last season, the Razorbacks spent just one week in the top 10, when they immediately lost three in a row.

While it’s still early in the season, Razorbacks coach Sam Pittman said his team is proud of its ranking and hopes it will help to continue to attract top-level talent to the program.

“I tweeted out that we were No. 10, and then I got some responses, ‘Well, it doesn’t matter,'” Pittman said Monday. “I ain’t tweeting it to (the media) or a 50-year-old man. I’m trying to use it for recruiting.”

This will be the eighth meeting between Arkansas and Missouri State and the first since 2011. The Razorbacks have won all seven matchups.

Missouri State is coached by veteran Bobby Petrino, who coached Arkansas from 2008 to 2011, when his teams were 34-17 before some messy personal issues — hiring his mistress and deceiving the university of various misdeeds — led to his firing.

“The last time Arkansas was relevant was when Coach Petrino was here,” Pittman said.

Petrino’s last team finished at No. 5, the only Razorbacks squad to end a season in the top 10 in 40 years.

“We’re very grateful for his time here and what he did for the program,” Pittman said. “We’ve used that in recruiting. Without him and his staff, we wouldn’t have been able to do that.”

Last year, Missouri State, which went 8-4 in Petrino’s second season, nearly pulled off a shocker against an eventual top 10 program in Oklahoma State, losing 23-16 in Stillwater.

“I’m proud of our team,” Petrino said Monday. “I’m proud of our assistant coaches and the players that we have. When you look at the last two games, they’re really difficult games for us. We’re playing good teams that are well-coached and they have good players and we had to go to battle to win the game. And we got better.”

Petrino said there probably would be some emotions Saturday when he first sets foot inside Donald W. Reynolds Razorback Stadium. But he quickly redirected the focus to his players and praised Pittman for rebuilding Arkansas to its lofty status.

“Sam’s done a great job,” Petrino said. “When you watch them play, first and foremost, you see that they have beliefs in what they’re doing. The coaches really believe in it, and the players go out and execute it. What he’s done with that program, he’s done a great job.”

Missouri State quarterback Jason Shelley is a 69 percent passer (37 for 54) for 563 yards and six touchdowns and has yet to throw an interception. The Bears are ranked No. 6 in the latest FCS rankings. They opened with a 27-14 win over Central Arkansas and last week edged UT Martin in a 35-30 thriller.

The Bears will have to contend with Arkansas’ Raheim “Rocket” Sanders, who leads the SEC with 273 rushing yards (136.5 per game, sixth nationally).

Arkansas has not needed to fully incorporate quarterback KJ Jefferson in its offense. Jefferson has completed a remarkable 76.6 percent of his passes (36 of 47) for 385 yards and four touchdown passes without throwing an interception and has rushed for 129 yards and two touchdowns.